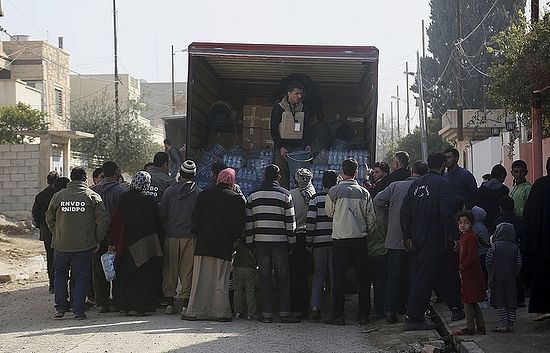 More than 3,500 needy Syrian civilians received humanitarian aid from the Russian center for reconciliation of the warring parties yesterday, January 25.

3.5 tons of bread and 3,500 hot meals were handed out throughout Aleppo neighborhoods in seven humanitarian actions, reports TASS. The reconciliation center reports that 5 tons of humanitarian cargo were delivered to the city in all. Additionally, more than 140 Aleppans received medical assistance from Russian medics.

Meanwhile, the demining work of the international antimine center continued its work in Eastern Aleppo’s buildings and streets. Russian mine pickers yesterday cleared minds from 63 residential houses and six mosques and destroyed 406 explosive objects, clearing an area of more than 70 hectares and 15 kilometers of roadway.

The Russian reconciliation center was established on February 23, headquartered at the Hmeimim air base in the Latakia province, to aid talks between the Syrian government and opposition and to organize humanitarian acts of charity. Russia's Palmyra Concert Reveals What the West Lacks
In the war on ISIS, only Russia is acting as if there’s something worth fighting for.