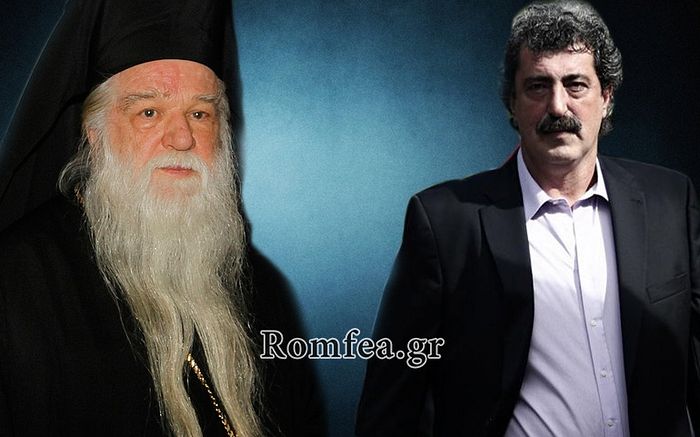 A prayer “For our impious, godless, and faithless rulers…” is being raised up in the Divine services in the churches of the Kalavryta Diocese of the Greek Orthodox Church. The ever-fiery and outspoken Metropolitan Ambrose of Kalavryta wrote of the prayer in an open letter to the Greek Minister of Health Pavlos Polakis, reports AgionOros, with reference to Romfea.

For his part, the minister has responded that he does not need the metropolitan’s prayers.

“You are destroying Greece. It is no accident that we have added a new petition to the Church services in our diocese: ‘For our impious, godless, and faithless rulers, the persecutors of our holy Faith and Fatherland, the members of our parliament who hate and wrong us, and for their repentance, let us pray to the Lord,” the prayer reads, according to Met. Ambrose’s letter.

In the letter to the minister, the hierarch criticizes the policies of the Greek authorities, pointing to the deplorable state of Greek medicine.

“Look at the state hospitals, which fall within the scope of your responsibilities. They don’t even have bandaging materials for the Greek patients. The priority for any medical assistance is given exclusively to immigrants! Greek citizens are starving and suffering! Your beloved pets are the immigrants,” Met. Ambrose declares.

“You take care of the Muslim immigrants, while you destroy Greek citizens with exorbitant taxes and the constant reduction of salaries and pensions… You are selling Greece into foreign hands,” the Greek hierarch noted.

Met. Ambrose has often raised the issue of the massive ongoing immigrant influx into Greece. In January, he stated, ““A great many ‘refugees’ and ‘immigrants’ are arriving daily to our country… In fact, the so-called refugees (in reality they are occupants sent to our country) have begun criminal activities. They attack, rob, hurt, and kill innocent Greek citizens… Islamist fanatics desecrate, plunder, and set fire to Orthodox churches. The Greek government watches indifferently, and in the meantime Greece is dying!”

Responding on his personal Facebook page, Minister of Health Polakis writes, “I do not need your prayer for forgiveness, because you have shown your Christian love by what you said about refugees in your response to me,” reports ortodoxia.info.

Met. Ambrose was never afraid to boldly speak the truth. He has often publicly spoken and written of the damage the atheistic authorities in Greece have brought and are continuing to bring to their Church and nation. He has written to His All-Holiness Ecumenical Patriarch Bartholomew about the ecumenistic problems with the 2016 Council of Crete, and has not been afraid to publicly chastise even the prime minister.

His Eminence has suffered scorn and persecution at times for his strict Orthodox stances. At some point in the future he will have to stand trial on charges of supposedly publicly inciting violence against gay people and abuse of his ecclesiastical office, stemming from statements he made in 2015 against the co-habitation law that was passed in Greece.

Met. Ambrose announced on Sunday, November 26, that he will retire at the end of 2018, having then completed 40 years of episcopal ministry to the Lord.