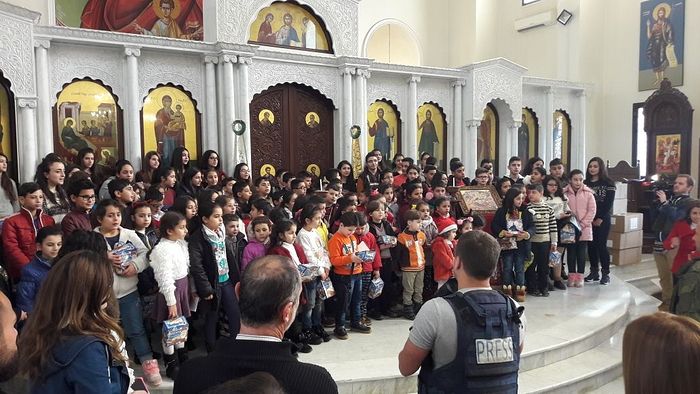 The Russian Center for the Reconciliation of Warring Parties and the All-Russian Veterans’ Organization “Combat Brotherhood” recently delivered Christmas gifts and school supplies collected by the Sunday School children and parishioners of Moscow’s Church of the Resurrection on Dormition Ravine to the Sunday School of the Antiochian Church of St. John the Forerunner in Latakia, Syria, reports the site of the Russian Orthodox Church.

At the Nativity feast 100 young Orthodox Syrians, aged 3 to 14, received icons from Russia, as well as candies. The Moscow children also sent their Syrian peers Nativity greeting cards in the Arabic language. The Syrian Sunday School students have promised to respond in Russian.

The Sunday School choir sang Christmas songs for Russian soldiers from the reconciliation center and representatives of the “Combat Brotherhood” organization.

Church rector Archimandrite Makary offered warm words of gratitude and congratulations to the parishioners of the Church of the Resurrection, its clergy, and the Russian children. The priest thanked the Russian people for their help in Syria and greeted all with the Nativity and the New Year, which he hopes, by the prayers of all people of good will, will bring the long-awaited peace to the Syrian land.

The Reconciliation Center and Veterans’ Organization have rendered help to suffering Syrian Christians many times. More than 3.5 tons of aid, including medicine, food, school kits, toys, and Pascha kulichi were delivered to the city of Mahardah in April. Polish Orthodox Church holds benefit concert for Syrian children
A charity concert of Christmas carols was held January 27 in the Royal Castle in Warsaw to benefit children in Syria.