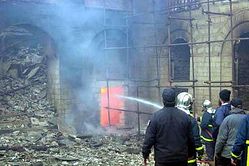 A fire that broke out at the Agios Panteleimon Monastery on Mount Athos was partially under control on Sunday, according to the Mount Athos fire brigade. The flames had been put out and six fire engines remained on the scene in case the fire was rekindled.

The fire broke out in the wing housing the monks' and workers cells and caused extensive damage to the 4th and 5th storeys of the monastery, as well as the roof of that wing. No lives were at risk during the fire, while the monastery basilica was not affected. The cause of the fire remains unknown.

Agios Panteleimon, also known as the 'Russian monastery', is a part of the semi-autonomous all-male monastic community on Mount Athos, a collection of historic monasteries dating from the Byzantine era.