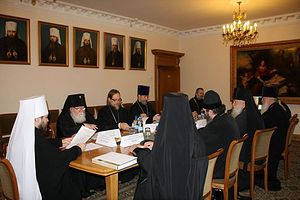 On November 17, 2011, the first meeting was held in Moscow by the working group on Church unity as the fifth anniversary of the signing of the Act of Canonical Communion approaches.

With the blessing of His Holiness Patriarch Kirill of Moscow and All Russia, the Department of External Church Relations of the Moscow Patriarchate hosted the meeting, presided over by His Eminence Metropolitan Ilarion of Volokolamsk. This body was formed by His Holiness at the request of the Synod of Bishops of the Russian Orthodox Church Outside of Russia.

Opening the meeting, Metropolitan Ilarion noted the enormous significance of the reunification of the Church in the Homeland and Abroad which took place on the feast of the Ascension of the Lord in May, 2007, for ecclesiastical and national life. The names of His Holiness Patriarch Alexy II of Moscow and All Russia and His Eminence Metropolitan Laurus of ROCOR, the archpastor added, will always be preserved with gratitude by the people of God, and they will enter history as those who reestablished unity within the Church after decades of separation.

Metropolitan Ilarion also recalled the enormous work done over the course of the three years prior to the signing of the Act of Canonical Communion by the joint commissions of the Moscow Patriarchate and the Russian Orthodox Church Outside of Russia: “During eight joint meetings of the commissions from June 2004 until October 2006, it was not simply the ‘mechanics’ of reunification that were worked out. This common effort helped us through the ‘school’ of mutual understanding and helped us learn to make sense of the lessons of the 20th century together, to see the path we have traveled in a new way, helping to enrich ourselves with the spiritual experience gained in examining ways of life which were different from our own. A series of important documents were drawn up which reflect our common viewpoint on matters of principle: the relationship between the Church and state, relations between the Orthodox Church and non-Orthodox communities and organizations, the status of the Russian Church Abroad as a self-governing part of the Russian Orthodox Church.”

“We also recognize,” continued the President of DECR, “the prominent role played in the process of reconciliation by then-Metropolitan and President of the Department of External Church Relations of the Moscow Patriarchate, now His Holiness Patriarch Kirill. His incisive vision in many ways determined the path towards unity, he was the chief architect of the model of reunification, which in the end became manifest. At the foundation of the approach he advocated was the principle of a respectful, constructive attitude towards the realities which had come to exist over many decades in the life of our church under conditions of separation.”

As noted by Vladyka Ilarion, the fifth anniversary of the signing of the Act of Canonical Communion is approaching, and this period, especially marked in an addendum to this document signed on May 4/17, 2007, “motivates us towards gratitude to God for the joy of unity we experience, and to making sense of our mutual path traveled during this period, and also to pondering our common future.”

Recognizing that even a brief account of everything that has happened in the mutual relations of the Russian Church Abroad and the Church in the Fatherland over the past five years would take a very long time, the head of the DECR noted that the retelling of many of these events would begin with the words “for the first time.” “Over recent years we experienced a great many joyful events which had not happened before. What once was impossible, and at first took place with great inspiration, is now becoming a daily reality in our church life.”

Even more numerous are examples of daily pastoral interrelations on a local level. “They all have great importance, because they bear witness to the fact that our Church is not only declared united but is truly so,” continued the archpastor.

“Still, we should not bask in triumph: a great deal more must be done, and much can be done better, and with these points in mind we must prepare for the coming 5th anniversary of the reestablishment of unity, not only by evaluating our achievements, but by exposing weaknesses, and pointing the way for the future, which is the goal set before us with the blessing of His Holiness,” noted Metropolitan Ilarion.

During the meeting that followed, the participants discussed bringing to life ecclesiastical decisions connected with the reestablishment of canonical communion between the Moscow Patriarchate and the Russian Orthodox Church Outside of Russia in May, 2007, and subsequent Councils of Bishops of the Russian Orthodox Church, and discussed a possible program for celebrating the fifth anniversary of the signing of the Act of Canonical Communion, as well as questions of ongoing cooperation on the local level.

Press Service of the DECR

Translation from the official website of the Russian Church Abroad