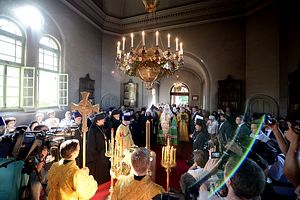 Patriarch Kirill of the Russian Orthodox Church who is on a visit to Japan has visited the Sendai Orthodox diocese which was badly hit by the earthquake and tsunami in March last year.

He gave the local priests money for buying church utencils.

The Patriarch started his visit to Sendai with holding a service in the Annunciation Cathedral. Local residents who lost their families and property as a result of the disaster attended the service.