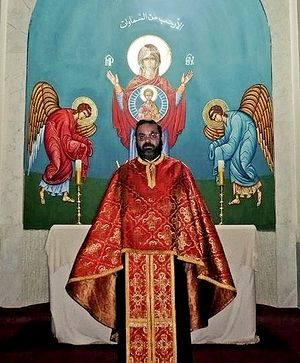 Fr. Fadi Jamil Haddad.
A bomb exploded this morning during Fr. Fadi Jamil Haddad’s funeral, the Orthodox priest who was kidnapped and found dead yesterday in Damascus. According to local sources of Fides, the explosion killed two civilians and some soldiers. The funeral Mass, celebrated in the church of St. Elias in Qatana by Greek-Orthodox Patriarch Ignatius IV Hazim, was attended by thousands of Christians moved and saddened by the loss of the priest.

In a statement sent to Fides Agency, the Greek Orthodox Patriarchate of Antioch defines Fr. Haddad a "martyr of reconciliation and harmony." In fact, the priest "had engaged in a noble humanitarian mission to free a member of his parish who had been kidnapped a few days before." In the mediation, Fr. Fadi was kidnapped along with another intermediary. The kidnappers demanded a huge ransom and then killed him.

The note of the Orthodox Patriarchate reports the "terrible tragedy", "Father Fadi Haddad’s body was found on the morning of October 25 in the Drousha area. There were indescribable signs of torture and mutilation on his body. He was identified by Father Elias el-Baba, a priest of the town of Hina, and was taken to the clinic in the city. The Patriarchate in Damascus was informed of his martyrdom: his innocent blood is a sacrifice for reconciliation and harmony ".

The note Fides received continues: "We strongly condemn this brutal and barbaric act against civilians, the innocent and men of God, who strive to be apostles of peace. They are men who hold together the hearts, wrap the wounds of suffering, comfort the sick, strengthen the weak in these difficult circumstances. We express the depth of our sorrow for these heinous acts that are unprecedented in the long history of our beloved nation, built on the foundations of love, cooperation, peace and harmony."

The Patriarchate urges "all citizens, humanitarian organizations and all people of good will to condemn kidnapping, murder, destruction, robbery, assault to the safety and welfare of citizens." "We call all to dialogue, peace and harmony," he continues, "to put an end to the innocent bloodshed that takes place every day."

The text asks the faithful Christians "to stand firm in our faith and our hope in the power of the Lord who wanted us to have life, and in abundance (John 10:10)", inviting them to "stay in their land and their nation, "looking to the future" with the power of faith. " "We ask God - said the Orthodox Patriarch – that Father Fadi Haddad’s martyrdom is a sacrifice offered for the children of this nation and for a truce in the painful events we are experiencing in this period."

Father Fadi Jamil Haddad was born in the city of Qatana on February 2, 1969. He studied theology in Damascus and Lebanon. He had married and was ordained a priest in 1995 by His Beatitude Patriarch Ignatius IV Hazim. He was the pastor of the Greek-Orthodox church of St. Elijah in Qatana. A source of the Patriarchate remarks that "he was loved by all religious groups and had not taken a position in the political conflict in Syria, but was strongly committed to reconciliation." (PA) (Agenzia Fides 26/10/2012)