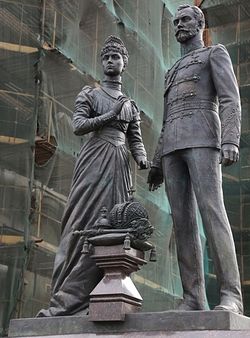 On May 12, near the Church of Resurrection of Christ close to the former Warsaw station (Varshavsky railway station) in St. Petersburg, the monument to the Holy Royal Passion-bearers, Tsar Nicholas Alexandrovich and Tsaritsa Alexandra Feodorovna was opened.

The event was devoted to the 400th anniversary of the House of Romanov and the 120th anniversary since the Royal family's wedding. The funds for the unveiling of the monument were raised by the parishioners of the church. The blessing was performed by Bishop Markell of Tsarskoye Selo, reports the Voda Zhivaya website.

The laying in 1904 of the foundation of the stone church on the Obvodny canal in St. Petersburg was devoted to the 10th anniversary of the royal wedding. Tsar Nicholas Alexandrovich approved that project himself.