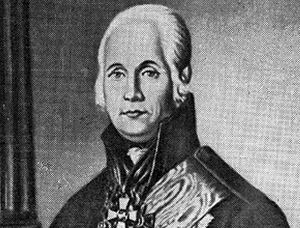 Fyodor Ushakov. Photo: RIA Novosti
A monument to Admiral Fyodor Ushakov, a legendary Russian Navy commander, was unveiled on the Greek island of Zakynthos on Sunday.

Crewmembers of a ship of the Black Sea Fleet that arrived at the island’s port a few days ago were among the guards of honor at the ceremony.

By erecting Admiral Ushakov’s statue the islanders gave their due to the famous Russian who commanded the Russian fleet that liberated the island from French invaders in 1798, who laid foundations for an independent Greek state and who treated the people of Zakynthos with love and respect, Zakynthos’ Mayor Gelios Bozikis said.

“We are thankful to our Russian friends and are confident that our relations will continue to strengthen,” the mayor said. Monument to Bogdan Khmelnitsky Dedicated in Belgorod
A bronze bust of the great hetman from Zaporozhye, military leader and statesman Bogdan (Zinovy) Khmelnitsky (c. 1595-1657) has been erected near the avenue with the same name at the Holy Trinity Boulevard of Belgorod.