The Issue of our Day 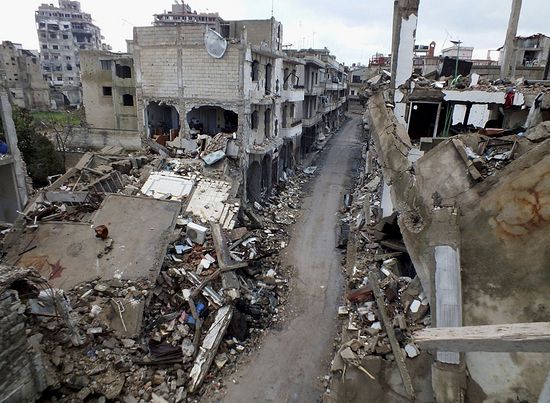 The city of Homs

This week I read a news article that broke my heart and called me to repentance.

In the midst of the fight over the budget and debt ceiling, in the midst of the ongoing saga of the “Bling-Bling Bishop” in Germany, and in the midst of football season, most of us (myself included) have been paying little attention to the ongoing war in Syria. For starters, the war has ground on long enough that it’s old news. The prospect of immediate American intervention has passed.

All the while, Christians are persecuted, driven away from their homes, or killed. My co-blogger Philip Jenkins predicted this in a post more than two years ago:

Any Western intervention in Syria would likely supply the death warrant for the ancient Christianity of the Middle East. For anyone concerned about Christians worldwide — even if you believe firmly in democracy and human rights — it’s hard to avoid this prayer: Lord, bring democracy to Syria, but not in my lifetime.

Certainly, the United States has not gone all-in in Syria by any stretch, but the West has encouraged the rebels, many of whom are resolutely hostile toward Syria’s Christian population. The calculus is complicated. The Syria regime is tyrannical but has offered a significant measure of protection to Christians. In response, Christians have hardly been among the regime’s most prominent opponents. In the eyes of many rebels, they are Assad supporters.

A recent article in Germany’s Die Welt (sorry, German language only) took a careful look at recent events in Maalula, a town fifty or so kilometers northeast of Damascus. From its description (in my rough translation): “Here Aramaic is still spoken, the language in which Jesus Christ preached … Maalula is a mystical, peaceful town … Still today is a female Apostle honored, Paul’s student Thekla. The two cloisters, which have made the town famous, were built at the beginning of the fourth century. Sarkis, Sergius, or Serge, depending on the language, was a Roman soldier, who because of his Christian faith was persecuted, murdered, and became a martyr.” A town of monasteries, a pilgrimage site, a town with significant Muslim and Christian populations.

For the last month, Maalua has been the site of an ongoing battle between government troops and the Al-Qaeda-affiliated Al-Nusra Front. When Jihadists (many of them from other parts of the region) captured part of the town, they told Christians they could convert or face decapitation. Some converted. Many fled. Others still live in fear.

The exodus of the Christians: first out of Iraq, now out of Syria. In swarms they leave the region. Soon there won’t be any Assyrian, Aramaic, Chadean, Armenian, Coptic, or Greek-Orthodox Christians in the heart of ancient Christianity. This great variety of Christian confessions will then disappear forever. In Iraq, the number of Christians has dropped in half since the American and British invasion of Iraq. The same scenario threatens in Syria.

When Syria became independent in 1945, around 20 percent of Syrians were of the Christian faith. At the outbreak of the Civil War in 2011 their number had shrunk to about six percent.

An estimated 100,000 Syrian Christians have fled their homeland (along with nearly two million other Syrians).

At times, the U.S. government has been robust in its support for religious freedom. And we should not only stand up for Christians, by any means. At the same time, given that nearly three-quarters of Americans identify themselves as Christians, would it be too much for our leaders to mention that fact and demand protection for their co-religionists?

Now, if our government has given this persecution too little attention, it has paid closer attention than I have.

I am usually too busy and distracted with my own life and by whatever else newspapers put before my eyes. We should repent of our distraction, pray for those afflicted, help refugees, and call on our leaders to help those in need and do everything in their power to protect those few Christians left behind. This is the issue of our day. Christian celeb couple pledge $25 million to help Iraqi and Syrian Christians
Film-producing couple Mark Burnett and Roma Downey have stepped up to renew attention to the needs of displaced Christians in Iraq and Syria who are in urgent need of food and shelter before winter sets in. No Room for Lukewarm as Mideast Christians Die: Doing No Harm, Doing Nothing, and Doing Something

No Room for Lukewarm as Mideast Christians Die: Doing No Harm, Doing Nothing, and Doing Something
Eight years ago, the CFR launched an initiative to bring together foreign-policy practitioners and “religious and congregational leaders and thinkers” whose ideas, experiences, and interactions can give purchase into understanding the role of religion in world affairs and as a variable for U.S. foreign policy. The true orthodox Cross is essential.
×