Divine Liturgy and the Great Thanksgiving 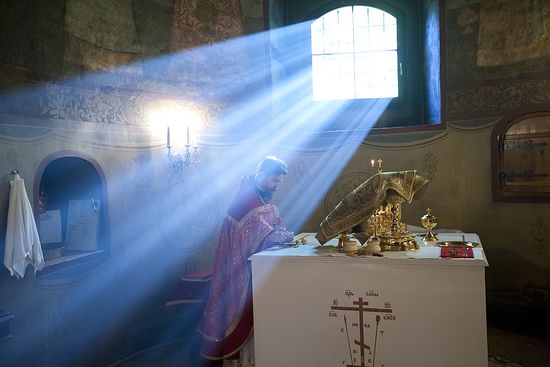 Some of the most profound words of the Divine Liturgy are rarely heard.

Standing at the south corner of the altar, the deacon quietly utters to the presiding priest: “It is time for the Lord to act.”

"It is time for the Lord to act;
they turned away from your law."

While not forgetting the first, we must note the second half of this verse, as well. Despite being unsaid, its implication remains: we have turned away from God’s law. The very reason we are both entering into and celebrating again-and-again this liturgy of the Lord is our own transgression. The failure of Adam, and the subsequent (and repeated) failures of God’s people throughout history has set the stage for not only the Incarnation of Jesus Christ, but also his victory over death itself.

Later in the liturgy, during the Great Anaphora, it is said:

Priest: Let us give thanks to the Lord.

People: It is proper and right.

For what are we giving thanks—the very meaning of “Eucharist”—when we celebrate the Divine Liturgy?

It is the work of the Lord; the endless love of God, poured out on the cross in the self-giving sacrifice of Jesus Christ, by which he has trampled down death by death. And all this, “while we were yet sinners” (Rom. 5:8). There is no wrath or justice in the Cross. Instead, there is spellbinding love—love so amazing that we can barely comprehend it, even as we have “turned away from your law.” 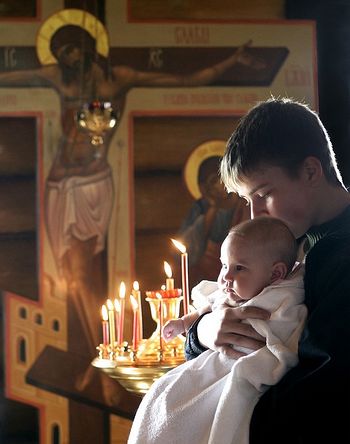 The words of Chrysostom’s Anaphora make our thankfulness plain:

"You brought us into being out of nothing, and when we fell, You raised us up again. You did not cease doing everything until You led us to heaven and granted us Your kingdom to come. For all these things we thank You and Your only begotten Son and Your Holy Spirit; for all things that we know and do not know, for blessings seen and unseen that have been bestowed upon us."

And then what I believe to be the most climactic—if not penultimate—moment of the liturgy:

Priest: We also thank You for this liturgy which You are pleased to accept from our hands, even though You are surrounded by thousands of Archangels and tens of thousands of Angels, by the Cherubim and Seraphim, six-winged, many-eyed, soaring with their wings, singing the victory hymn, proclaiming, crying out, and saying:

Blessed is Christ, indeed, for it is due to his advent, life, death, and resurrection that we can even dare to sing this victory hymn.

The joy of Pascha/Easter is the reason we celebrate (again and again) this Divine Liturgy, joining in as we do with the angelic hosts of God’s throne room in eternity. It is because of his advent that we give thanks; it is because of his triumph over death that we can be given true life from his deified body and blood; it is because of his resurrection that we may sing the victory hymn, for heaven and earth are filled with his glory. 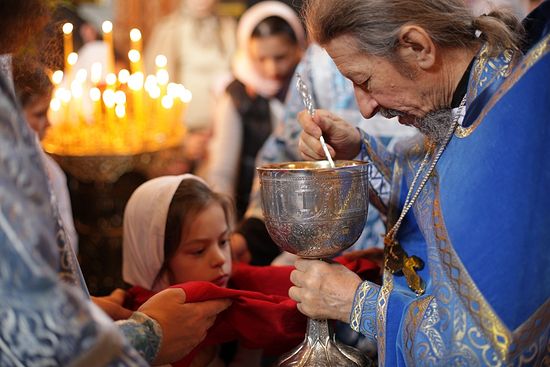 If nothing else, the Divine Liturgy shows us what both gratitude and thanksgiving are all about.

We are brought into being out of nothing, and when we fall, God raises us up again. The love of God is displayed, in that while we were yet sinners, Christ died for us. The Lord has taken action, even though we broke (and continue to break) his law. Desire, Stillness, and the First Murder
Gabe Martini
Generations of Americans were raised on the “American Dream.” Many of us were taught from childhood that we could be and do anything we wanted. We were told to expect and even demand as much, stopping at nothing to “achieve our dreams.” Leithart and Emptying Nicaea of the Spirit
Gabe Martini

Leithart and Emptying Nicaea of the Spirit
Gabe Martini
Perhaps a classic analogy would be best served here: The Church is a seafaring vessel, churning through the tumultuous waters of this life. Many times, the Church must wade through dangerous seas, filled with depth charges, icebergs, and every sort of obstacle that the imaginations of Renaissance men and the cunning of the evil one can devise. And yet, despite these continuous assaults, the ship sails ahead, eventually leaving the controversies in her wake. Lutherans Write the Patriarch: How the “German Orthodox Church” Almost Happened
Gabe Martini
Like Luther, Melanchthon believed that their “reformed” faith — as a “peeling away” of the numerous developments and supposed abuses of the Latin Church over the centuries — would be virtually one and the same as the faith of the “Greeks” in the east. To that end, the leading “Lutheran” theologians of the day had their Augsburg Confession translated into Greek, and sent with their new-found friend in Demetrius back to the Patriarchate of Constantinople.
Comments