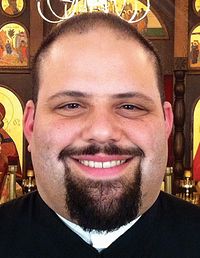 The rich smell of incense greeted me when I walked into the St. Ignatius of Antioch Orthodox Christian Church in Twin Falls. There were about three rows of chairs in front of an elaborately decorated wall.

The Rev. Michael Habib said this wall is called an iconostasis, which is a wall of icons and religious paintings that separates the nave from the sanctuary in a church.

The smell of incense, he said, was used during worship to help raise their prayers to God.

Everything inside the small church was decorated in gold, dark greens and deep reds. It was hard to believe that this was once the inside of a garage and that Habib’s office next door was once part of someone’s house. He said it also used to be a commercial property before becoming a church. The church has been around since the early 1990s and some of the early services were held in the Twin Falls YMCA.

Habib is the new head priest at St. Ignatius Orthodox Christian. He and his wife, Masha, arrived to Twin Falls about a month ago. This will be the first time in two years the church has had a full-time priest.

“The interesting part is that this parish functioned very well without a priest,” he said.

Habib grew up in the Los Angeles area and has visited Idaho on numerous occasions. Even though he grew up in a large city, Habib said he doesn’t care for them, and welcomed the move to Idaho.

Habib, 32, was ordained as a priest in July. He said he grew up in the church and becoming a priest was natural.

“Many people who knew me as a kid knew I was going to be a priest, but I didn’t know,”he said.

What is Next for Him

Before their move, the Habibs spent a year in Alaska. His assignment in Twin Falls is the first church he has led. He was also surprised by the diversity of the church and said a number of refugees attend services. Sometimes there are up to 50 people in attendance, which is a lot for the small church. It is often standing room only, but there are already plans to do some renovating to open up more space. Eventually the church congregation would like to move from its location and expand. A new Priest ordained in the Russian Church on the Balearic islands
At the Liturgy the head of the diocese of Korsun ordained Deacon Viktor Serednitsky, a Cleric of the parish of Nativity of Christ on Mallorca, to the priesthood. "I Dreamt of the Priesthood Since Childhood." A conversation with the First Hierarch of the Russian Orthodox Church Outside of Russia
Olga Tarasova

"I Dreamt of the Priesthood Since Childhood." A conversation with the First Hierarch of the Russian Orthodox Church Outside of Russia
Olga Tarasova
I was born in Western Canada, in the Province of Alberta, where there were a great many Ukrainian settlers. My parents immigrated to Canada in 1929 from Ukraine, which at that time was part of Poland. They had lived in Volhynia guberniya. After World War One, Poland was granted the western part of Ukraine—Volhynia oblast, Galicia, etc.
Comments