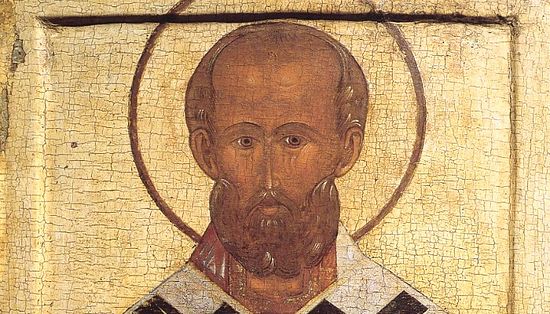 Many words could be written about the true life and legacy of Saint Nicholas.

While most today only consider a fictional, elf-like inhabitant of the North Pole—and his band of flying reindeer—the prototype of this myth is a very real and very important person in the life of the Church.

Born sometime in the latter half of the third century, Nicholas grew up in a wealthy and educated family. He was an only child, and his parents, Theophanes and Nona, lived together with their son in the city of Patara, Lycia. Lycia was a province in the southern region of Asia Minor, or present-day Turkey.

Nicholas was raised as a Christian, and he followed in his uncle’s footsteps in his service to the Church. His parents felt blessed by their only child, dedicating his life to the Lord. He was tonsured a monk at the monastery of New Zion, and his uncle—also named Nicholas—served as Bishop of Patara. His uncle eventually had the privilege of ordaining his nephew Nicholas to the priesthood.

At the time of his parents’ death, Nicholas received an enormous financial inheritance. Not wanting to leave the ascetic life and his service to the Church, Nicholas donated all of his inherited goods and possessions to the poor and needy. Out of reverence for the words of Christ to “not let your left hand know what your right hand is doing” (Matt. 6:3) when giving alms, he did all of his acts of charity in secret. For example, a father in Patara had once lost all of his wealth, leaving three daughters without the benefit of a dowry, and fearing the worst. When learning of this, Nicholas one night secretly left three small bags filled with money in an open window for the man to discover the next day.

Over time, and through various changes in custom, these acts of charity by St. Nicholas became the Christmas stocking tradition, where children leave their socks or shoes out to be filled with gifts and candy on the eve of Saint Nicholas’ commemoration. While gift-giving for Christmas is commonly tied to the wise magi of Persia and their gifts for the newborn Christ, it is probably mostly derived from the life (and later legends) of St. Nicholas. As Orthodox Christians, we give chocolates or small gifts to our children on the anniversary of his death (Dec. 6) to remind them of the importance of charity, as well as the Christlike example set by St. Nicholas some 1,700 years ago.

Nicholas was appointed archbishop of Myra (in Lycia) by popular demand in the early part of the fourth century. He was then imprisoned during the persecution of Emperor Diocletian (A.D. 284–305), later to be set free when Emperor St. Constantine the Great made Christianity legal under Roman law. That same Constantine summoned the first Ecumenical Council, the Council of Nicaea (A.D. 325), with Nicholas in attendance.

Santa Claus—that is, the secular or commercialized version of St. Nick—is referred to as a “jolly” fellow, but the real St. Nicholas was a devout and serious man, especially regarding his Christian faith. During the deliberations of the Council of Nicaea, the popular heresy of Arianism was being debated. Arianism—so-called for its founder Arius, a presbyter from Alexandria—denied that Jesus was the only-begotten Son of God, being of one essence with the Father. 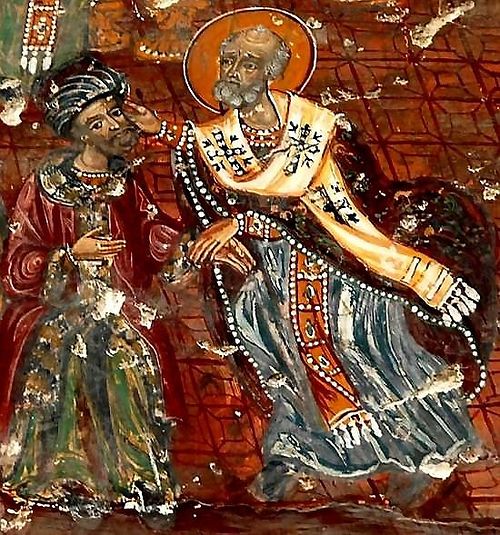 When Arius openly rejected the divinity of Christ in the presence of the assembled bishops, Nicholas was filled with righteous indignation, striking Arius on the face. Since it was forbidden for clergy to engage in violent acts, the bishops of the council were conflicted over what action to take. However, Nicholas was soon exonerated after our Lord and his Mother appeared in a vision to the other bishops, telling them to leave Nicholas alone. As a result of the council, Arius and his followers were excommunicated, the Nicene Creed was written, and the orthodox belief of Christ as the only-begotten Son of God was preserved in the life of the Church—thanks in part, at least, to the devotion of St. Nicholas.

On December 6, 343, Nicholas reposed in the Lord. Hundreds, if not thousands of miracles have been attributed to his intercessions since that time, and he was being commemorated as a Saint (along with his uncle) by at least the reign of Emperor St. Justinian the Great (A.D. 527–565). He is considered to be the patron Saint of a number of cities, monasteries, churches, and even entire nations.

When the Muslims conquered Myra in 1034, there was a desire on the part of Latin crusaders to retrieve Nicholas’ relics from Saracen captivity. In 1087, Italian soldiers brought Nicholas’ relics back from Myra to the city of Bari, Italy, where they remain entombed in a church that bears his name. As a result, the fame of St. Nicholas spread throughout northern Europe, leading eventually to the legends of the Dutch “Sinterklaas,” a character that turns into “Santa Claus” in the New World.

But far more poignant and meaningful than any overweight elf, the real St. Nicholas is a Christian example of faith, charity, and love. When both giving and receiving gifts this Nativity season, think back to the charity of St. Nicholas, finding ways to imitate his sacrificial giving to those in need. Do alms in secret, seeking not the glory or approval of the world. Give to the poor as if you were giving to Christ himself, knowing that all human beings are lovingly created in the image of God.

Become like St. Nicholas, and you can become like Christ. And this is the true and enduring gift of St. Nicholas to the world—an example of humility and faith that points us towards a more perfect union with the only-begotten Son of God. Sermon by metropolitan Anthony (Khrapovitsky) of Kiev and Galich on the feast day of St. Nicholas the wonderworker
Metropolitan Anthony (Khrapovitsky)
Tell me, Orthodox Christians: If there were ever such a man who for a grave crime were sentenced by royal decree to eternal prison, and his kind master would ask of the king that he would be forgiven, and instead this master accepted his punishment upon himself, while the criminal remained free; and that this good master sent him this good news, in a letter saying “I freed you, and took upon myself your just punishment from the king”? Tell me, brothers, what would the emancipated criminal do with this treasured letter?

Barron12/24/2013 1:19 am
I love this article about St Nicholas. I was curious if we could have permission to post this on our website at www.roseburgorthodoxchurch.org? We are a small mission in Roseburg, Oregon and we are looking for more content to post on our website. We would make sure that your authors always get credit for writing the article and make sure your website is listed as where the article was found.

Also, if we found other articles of interest, could we use them too?