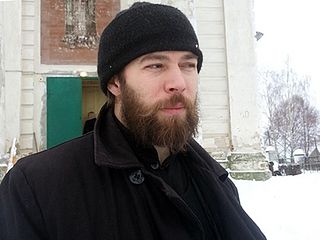 A quiet, godly atmosphere in the village of Tatishchev Pogost in the Yaroslavl region was disturbed by armed criminals. Nobody was prepared for a meeting with uninvited "guests" with knives, and the robbers reckoned on this. Priest Bogdan Vakhnenko was holding the much stronger weapon of faith, which helped him detain the robbers, reports the Pravoslavnoye Zakamye website.

When the ordinary looking men entered the church, nobody suspected anything bad. But the priest, knowing about a criminal gang of church robbers who had been at work in the town, felt something wrong at once.

Approaching them, he stumbled upon a knife and three men. His heart frozen, the priest dialed the police. Anything could have happened then. But the police had time to come and detain the culprits.

"I believe this was a real miracle. They could have run away, but did not do it!" said the fearless priest. At the same time, Priest Bogdan Vakhnenko has courage not only by the Lord's Providence. His great-grandfather was a non-commissioned officer, and his grandfather was a hero of the Soviet Union. Murderer of priest in southern Russia sentenced to 12 years in high security prison
According to the criminal case materials, the murder defendant set the priest’s house on fire with the help of kerosene in order to conceal the traces of his crime. Metal thefts: churches told to cut back trees to thwart Criminals
Many are now locking their doors and one congregation has camped overnight to thwart the criminal gangs.

Unidentified criminals rob Russian church in Lisbon
All Saints Parish of the Moscow Patriarchate in Lisbon (Portugal) was robbed in the early hours of September 21.
×