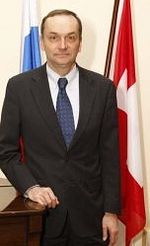 Switzerland Ambassador to the Russian Federation Pierre Helg expressed gratitude to the Russian Orthodox Church for its participation in releasing detained in Ukraine OSCE observers, headed by the Swiss President.

"On behalf of the Swiss government and I personally would like to thank you for attentive attitude and support in releasing two groups of OSCE observers in Ukraine," the ambassador said in his letter to head of the Synodal Department for External Church Relations Metropolitan Hilarion of Volokolamsk cited on Wednesday in the DECR website.

Helg thanked Patriarch Kirill of Moscow and All Russia and Metropolitan Merkury of Rostov and Novocherkassk "who was a contact person in this important for Switzerland affair."

He stressed that he highly appreciated "the noble role of the Russian Orthodox Church on setting stable and just peace in Ukraine."

International observers have recently been released without any preliminary conditions. Not long before it, on May 25, Patriarch Kirill in his address urged "to help release a group of observers detained in south-east Ukraine." According to the primate, "liberation of these people will become another important manifestation of good will and strive for peaceful settlement of the Ukrainian crisis."

The Russian Foreign Ministry has recently stated that liberation of observers was much a result of Patriarch Kirill's personal call as he appointed a contact person from the Church on the question Metropolitan Merkury. St. Alexander Nevsky Cathedral in Sloviansk again shelled during the Sunday Liturgy
At that moment many people – about 1000 in number – were on the territory of the church. Many believers who had come for the service were inside the church, and those who were waiting for humanitarian aid gathered in the courtyard. When the shelling began, everybody rushed into the church. The cathedral was packed with people; the worshippers were kneeling and praying to God with tears. City camp for refugees from the Ukraine blessed in the Rostov region
The archpriest wished the rescuers physical and spiritual strength, courage and fortitude in their difficult work.

His Holiness Patriarch Kirill of Moscow and All Russia sends a message to Pyotr Poroshenko, president Elect of Ukraine
His Holiness Patriarch Kirill
The task that faces you is difficult and very important. The challenge for you is to find ways and means for reconciliation of the hostile parties and to do anything possible for the restoration of civil peace and accord. I am confident that in the present situation it is necessary to conduct an open dialogue with people and public leaders and heed the opinion of all residents of the country.
Comments
×