Plan of Comprehensive Aid to Refugees Worked out by the Church 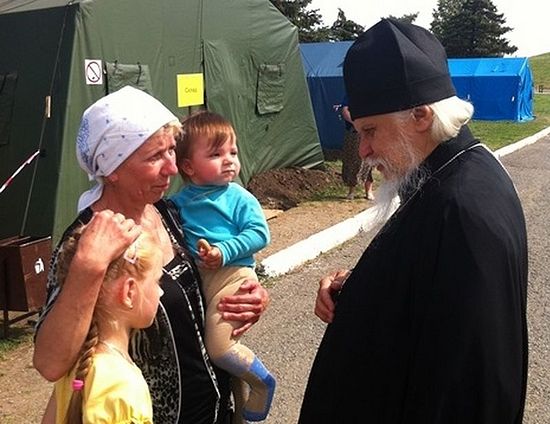 With the blessing of His Holiness Patriarch Kirill, in the near future guidelines for the organization of aid to Ukrainian civilians will be sent out to dioceses of the Russian Orthodox Church on the territory of Russia, reports the website of the Synodal Department for Church Charity and Social Ministry.

In accordance with the document, it was suggested that stocks of humanitarian aid for the refugees be created at churches, and it was recommended that dioceses receive Ukrainian citizens in diocesan institutions (orphanages and monasteries) and employ them, as far as possible.

The Church will devote special attention to assisting the most vulnerable categories of refugees: unmarried mothers with children, families with many children, the elderly, pregnant women and disabled people. The personal needs of these people will be ascertained by priests who will be in charge of taking all large centers of temporary accommodation under their patronage. Their duties will include not only spiritual and psychological aid to the refugees, but also the organization of humanitarian aid and the targeted meeting of requests of the most needy people.

Furthermore, the Church will assist refugees who are staying at their relatives’ and friends’ homes. “Diocesan churches should give permanent support to refugees living in private houses and flats: provide them with humanitarian aid and food, assist them with the execution of documents and the search for employment,” the document reads. In dioceses where refugees from the Ukraine are currently staying, work teams will be formed to unite all the church structures of the region that are involved in aiding the refugees.

At the present time over 500 refugees have taken shelter at church institutions in Priozersk, Kolomna, Kostroma, in the Rostov, Nizhny Novgorod, and Voronezh regions, in the Republic of Udmurtia (Russia) as well as in the Donetsk region in the Ukraine, and in the Crimea.

At present three monasteries of the Yekaterinburg Diocese as well as a number of other dioceses of central Russia are ready to receive refugees.

Hundreds of parishioners throughout Russia either have accommodated the refugees at their homes or are renting flats for them. The dioceses situated in the Rostov region are the most active in rendering aid to the refugees: over 400 tons of humanitarian aid were delivered to the refugees from the church humanitarian aid storage in the city of Rostov-on-Don alone; every day about 60 Ukrainian citizens are given aid at this storage. The Synodal Department for Charity has sponsored tickets for 40 refugees to Novosibirsk: there job positions have been prepared for them and living facilities have been created. Priests who Completed Courses of Psychological Aid in Emergency Situations Start Working with Refugees
The first graduates of “Complex Aid in Crisis Situations” courses have started their work at the centers of temporary accommodation of refugees in the Rostov region. “God is testing our Christianity.” Helping the displaced and needy
With the town’s population of 4,000 residents, Svyatogorsk has already received about 25,000 refugees. 470 people are currently accommodated on the territory of the Svyatogorsk Lavra, with 201 children among them. The youngest refugee is 1 week old and the oldest one is 95. The people have gathered here in great number, hoping for the help of God and the Protection of the Mother of God—the Abbess of this holy place. Metropolitan Mercurius of Rostov: “The Church is doing its best to help the refugees”

Metropolitan Mercurius of Rostov: “The Church is doing its best to help the refugees”
The Rostov region in Russia has declared a state of emergency regarding aid to refugees from the Ukraine, and the Church is doing its best to support the arriving people, to help free them of there “stupor and fear”, reported Metropolitan Mercurius of Rostov and Novocherkassk on Wednesday to RIA-Novosti.