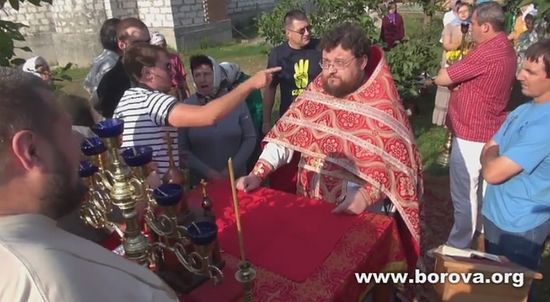 Extremists wearing “Freedom” party symbols and “The radical Party” of Oleg Lyashko burst into the church courtyard and disrupted the service. The hooligans leaned on the altar, touching it with their hands, insulted the priest and threatened him. According to Orthodox tradition, only ordained priests and deacons can touch the holy altar. The altar when touched by people other than a priest or deacon is considered defiled.

The hecklers complaint against the priest is that he is with the Ukrainian Orthodox Church, Moscow Patriarchate. Later, a video showing the incident was later uploaded to the Internet. Vladimir Legoida: “Inviolability of sacred sites in the Ukraine is the only hope for peace”

Vladimir Legoida: “Inviolability of sacred sites in the Ukraine is the only hope for peace”
Chairman of the Synodal Information Department of the Russian Orthodox Church Vladimir Legoida has regarded the cases of damage and destruction of churches of the Ukrainian Orthodox Church, which took place in Lugansk and Horlivka in recent days, as breaking the hope for peace.

Alexey9/7/2014 6:59 pm
They not only touched the altar. Later on, someone throws something red at the priest and onto the altar table.
×