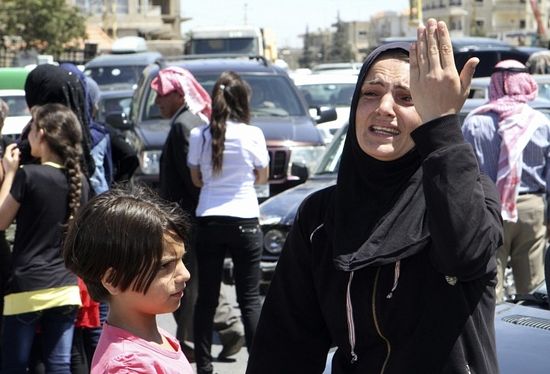 Christians in Lebanon's Bekaa Valley have begun arming themselves in preparation for an Isis (now known as the Islamic State) offensive as it seeks to expand its territorial control outside of Syria.

Up to 3,000 militants from the Islamic State and other jihadists occupy the mountain range between Lebanon and Syria near the Sunni town of Arsal.

As IS seek to grab land outside of the mountain caves and farms they currently control, Christian volunteers have now created village defence forces to protect against the Sunni militants who have taken up to 21 Lebanese soldiers and policemen hostage.

"We are a minority and we are under threat by the jihadists," Rifaat Nasrallah, a commander of the volunteer guards in the Greek Catholic town of Ras Baalbek, said.

"It wasn't the idea of anyone in particular," Nasrallah says of the formation of defence units. "The whole village felt in danger so we all agreed it was necessary."

"We don't shoot if we see someone or something moving in the mountains," said one of the watchmen. "We just call the Army and they investigate."

Ras Baalbek has a population of 15,000 and is separated from the flashpoint town of Arsal by arange of hills.

"Imagine if Islamic State makes it into Ras Baalbek and they crucify a Christian. It will set Lebanon alight," a western diplomat in the Lebanese capital of Beirut, speaking on condition of anonymity, told The Times.

There are approximately 2.4m Chrisitans in Lebanon, 20pc of the total population.

The terror group has continued to crack down on religious freedom since the announcement of its Islamic "caliphate", straddling the Iraqi-Syrian border.

The Sunni jihadists have taken over Iraq's largest Christian town of Qaraqosh causing thousands of residents to flee towards Kurdistan region.

They also issued an ultimatum to Christians in the city of Mosul to convert to their radical form ofIslam or be forced to either pay a tax, leave the city or be harmed for refusal to convert.

The city is now reportedly empty of Christians as hundreds of families fled following the ultimatum of death or a historic contract ‒ known as "dhimma"‒ where non-Muslims can receive protection if they pay a fee known as a "jizya". Fr. John10/8/2014 7:54 pm
I visited Lebanon twice this summer. I found people busy in everything except their safety from IS. I have two nephews officers in the Lebanese army and few other relatives as soldiers who tell you they have no basic arms to protect themselves because America and Israel don't allow them to buy arms for the "fear of Hezbollah"!!!. And everybody knows that Hezbollah is against IS, The Muslims, the majority of people and the government are also against IS. America and Israel created Al Qaida and IS as Helary Clinton confessed; and they still back them up even though they pretend they are fighting against them along with Canada and Europe. Because the main goal of American and Israel is not to destroy the danger which is threatening "Arab"; but to create more chaos at no cost. I pray that no one else than God in control.
Fr. John
×