Archimandrite Ilia (Kartozia) saved the lives of a Greek lady and her little daughter on the Norman Atlantic ferry at the cost of his own life. The Italian La Republica newspaper relates the details of the incident. 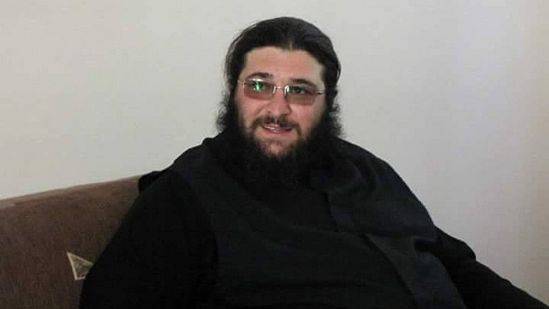 The eyewitnesses recounted how the Georgian monk had saved their lives at the cost of his own. Archimandrite Ilia, Abbot of the Monastery of St. David the Builder in Mtskheta, headed the rescuing team from among the passengers who evacuated people from the burning ferry, reports the Geomigrant portal.

One of the catastrophe survivors named Irakli has said that Father Ilia (Kartozia) consoled him in his moment of despair and gave him the strength to rescue his 9-year-old son, wife and other relatives. “It was he who saved me and gave me strength,” said Irakli to the Italian daily.

When the fire broke out Irakli seized his child and took to his heels but was overcome by fear. “Father Ilia told me to calm down, to think about God and believe that our lives would be saved.”

“He told me that God would not abandon us and showed us which direction we should go. When it was his turn to take a lifeboat Fr. Ilia saw a woman with a little girl, who were probably Greek, and gave them his place, himself remaining on the vessel which was ablaze. But when he left the ferry the rope broke off and the priest fell into the raging sea.”

According to the eyewitnesses’ evidence, the archimandrite could not reach the life jacket that had been thrown to him and thus drowned. Fr. Ilia was on the Norman Atlantic ferry as he was making a pilgrimage to Bari to venerate the relics of St. Nicholas. He was carrying icons with him.

According to the Rai 2 Italian TV channel, later the priest’s body together with his rucksack with icons were found on the shore at Lecce, Italy.

The heroic deed of the priest has already provoked a broad public response in Georgia and he is compared by many with the great Georgian theologian, historian and ecclesiastical figure, Archimandrite Grigol Peradze (1899-1942), who helped Jews during World War II and thus was captured and taken to Germany. He was martyred in the Nazi concentration camp of Auschwitz, when he entered a gas-chamber in place of another man. The New Martyr Grigol was canonized by the Georgian Orthodox Church in 1995.

Eyewitnesses report that Archimandrite Ilia remained side by side with the captain and was praying till the last minute of his life.

The remains of Father Ilia will be returned to Georgia this Saturday. On Martyrdom, and the Maccabees
St. Cyprian of Carthage

On Martyrdom, and the Maccabees
St. Cyprian of Carthage
That it was predicted before that the world would hate us, and that it would stir up persecutions against us, and that no new thing is happening to the Christians—for from the beginning of the world the good have suffered, and the righteous have been oppressed and slain by the unrighteous.