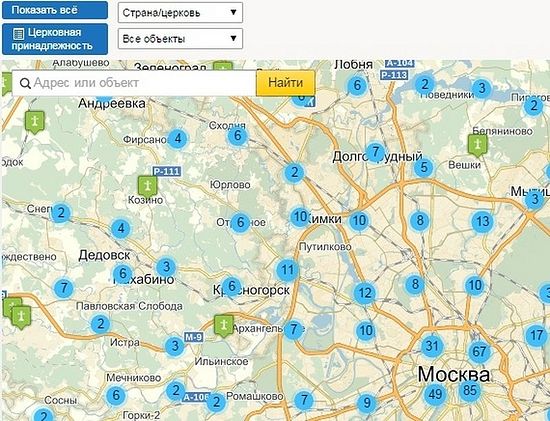 Dioceses, monasteries, convents, and parish churches of the Russian Orthodox Church have taken part in the most large-scale Church internet-project, “The universal map of churches and monasteries”, whose beta version recently became available for internet users on the Moscow Patriarchate’s official website.

The pilot version of the project includes more than 15,000 Orthodox sites and embraces not only the territory of the Russian Federation, but also the Ukraine, Belarus, and Moldova. Other countries are to be included in the project as well. The data of “The universal map of churches” will be shared with the largest secular web services as part of their joint partnership programs. Chora on Patmos: Unesco World Heritage Site
The small island of P&#225;tmos in the Dodecanese is reputed to be where St John the Theologian wrote both his Gospel and the Apocalypse. A monastery dedicated to the ‘beloved disciple’ was founded there in the late 10th century and it has been a place of pilgrimage and Greek Orthodox learning ever since. The fine monastic complex dominates the island. The old settlement of Chor&#225;, associated with it, contains many religious and secular buildings.

Amanda Sura3/6/2017 4:29 am
Can you please post a link on the website where this information is available?