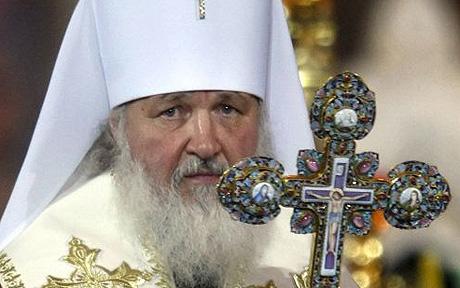 rticle 9 of the 21 article agreement establishes cooperation “on the protection of maternal and child health, including reproductive health, promotion of family values and prevention of abortion.”

The agreement includes joint actions with medical institutions for the

“creation of crisis pregnancy centers at hospitals with the participation of psychologists and participation of representatives of religious organizations of the Russian Orthodox Church in advising women who are planning to terminate the pregnancy, in medical institutions”

and for the provision of space for

“posting information of religious organizations of the Russian Orthodox Church on the stands in medical institutions.”

“joint efforts to provide assistance and support to pregnant women whose prenatal diagnosis indicate to the malformation of the fetus, as well as mothers who give birth to a child with developmental disabilities.”

The Russian State Duma is considering legislation on abortion that includes limiting funding for abortion to only those that are considered medically necessary. The bill is designed to help reduce the number of Russian children destroyed through the violence of abortion.

According to the UN’s Department of Economic and Social Affairs, for every 1,000 births, there are 34 abortions in Russia where the fertility rate is below replacement at 1.53.

The legislation would ban private abortion clinics and over-the-counter sale of abortion inducing medication would only be available through a doctor’s prescription. Women considering abortion would be given ultrasounds. One of the sponsors of the legislation, Yelina Mizulina, states that “up to 80 percent of them [abortion minded women] refuse to have the abortion when they see their child on the screen.”

Patriarch Kirill, the head of the Russian Orthodox Church, is seeking a total ban on abortion. In a speech to the Duma earlier this year, the first ever by a religious leader, he referred to abortion as “evil” and “infanticide.” In regards to the present bill, he believes that “taxpayers must not pay for this.”

In response to the proposed legislation, the Parliamentary Assembly of the Council of Europe tabled [introduced] Written Declaration 594 entitled “Women’s right to access appropriate reproductive health services in the Russian Federation” which states:

We the undersigned members of the Council of Europe Parliamentary Assembly are strongly concerned about the three draft laws submitted to the State Duma of the Russian Federation aiming to severely restrict access of women to abortion. They aim:

1. to require women to visualise and listen to the heartbeats of the foetus before being given permission to access a legal abortion;

2. exclude coverage of abortion from the Obligatory Medical Insurance;

3. to prohibit the sale of safe medication that terminate pregnancies.

The World Health Organization (WHO) has clearly stated that “ultrasound scanning is not routinely required for abortion”. It only serves to emotionally manipulate women. Excluding insurance coverage for a service that only women need is discriminatory and will affect poor, rural women and women in vulnerable situations. The State medical system must additionally ensure the availability of various methods of abortion suitable at different stages of pregnancy. These proposed measures will lead to backstreet abortions and increase maternal mortality and morbidity rates and are an affront to women’s rights.

All individuals are entitled to the highest attainable standard of health, which the State must ensure. We call on parliamentarians in Russia to turn down the above draft laws.

PNCI notes that the Members of the Council of Europe Parliamentary Assembly in their rush to object to the pro-life provisions with worn-out pro-abortion arguments are forgetting that the International Conference on Population and Development Programme of Action states in section 8.2 “Any measures or changes related to abortion within the health system can only be determined at the national or local level according to the national legislative process.”

The Russian State Duma is acting in its sovereign capacity to save the lives of Russian children and offer their mothers real help and support. Such action ought to be applauded, and if not, it should not be opposed as the action is fully compliant with international standards. Bill that restricts state funding for abortions introduced to Russian State Duma
The bill proposes to put a legislative ban on financing abortions at the expense of budgetary funds, except for abortions for medical reasons and on condition that there is an imminent threat to a woman's life.
Comments

Abortion brings a curse on a nation. GOD is in control and he does not like abortion and says do not do it. The People who created the baby should be held accountable for unwanted pregnancies. Adoption should be the only choice not abortion. The world is growing colder because LAWLESSNESS abounds (not Keeping the laws of GOD).

The Governments who approve of abortion are evil and if they will kill a Innocent baby they will kill you. Trump and Putin should lead the way and ban abortion in the USA and Russia. Its time to do whats right for the sake of humanity.

Greetings in the name of our Lord Jesus Christ ,

It’s my privilege to have an email with you. I am Edward Qaser from Lahore , Pakistan.

I am serving the Lord Jesus Christ with Christian based Humanitarian Organization, to glorify His name . Our main focus is reach to unreached with Love of Christ.

Millions of Non- believer need of knowing about the truth and Love of our Lord Jesus Christ especially the poor people are deprived one. EGM Pakistan is a Humanity base organization and working for the development of the human beings, its major object is to mitigate the effects of poverty, disease , illiteracy and disasters.
We accomplish this missi

Lily Mendoza 8/4/2015 2:46 pm
Praise be to God for Russia who is defending the lives of unborn children. Other country's should look up to Russia and join forces to defend the unborn children by abolishing abortions. Russia I am keeping you in my prayers. God bless Russia..

lilly7/24/2015 1:40 am
Jesus said to Sr Lucia at Rianjo " It is never too late to recourse to Jesus and Mary!"
I believe Jesus and I think that the Consecration will be done " late" as Jesus said, but not too late. After the Consecration to the Immaculate heart of Mary, Russia will be the light to the world and will be the impetus to convert the world to Catholicism and be the instrument of Our Lady's promised period of peace.
Russia has seen what Bolshevism has done to them and knows only Christianity can promote peace and the common good. The USSA is now the atheist Bolshevik nation. The tables have been turned.
The Consecration of Russia has to be done for the World!

Janet Maher7/22/2015 8:34 pm
Please pray for America to do the same.
Pray for unity between all Christians.
Pray for the unification of the dates of Easter--So that we may all be one as our Lord and Savior desires.

I love you and God bless you!

You said:
"Dear Bobby: I am afraid it is decades too late for the consecration of Russia to the Immaculate Heart of Mary. Our Lady of Fatima has given several opportunities for such consecration; and She described in detail how it must be performed. She also extended the deadline... But has never been done... God bless our poor suffering world, and have mercy on our souls!"

Don't worry! Did you remember that Our Lady said:

Don't worry, it will happen!

lidiya phillips7/17/2015 6:50 am
I took part in it as church social worker at the representation of The Orthodox Church of America (OCA) in Russia (located in the heart of Moscow at the Cathedral of St. Martir Catherine on the Hills) since the inception of the program. It is so incredibly beautiful what is happening there! Dear Bobby: I am afraid it is decades too late for the consecration of Russia to the Immaculate Heart of Mary. Our Lady of Fatima has given several opportunities for such consecration; and She described in detail how it must be performed. She also extended the deadline... But has never been done... God bless our poor suffering world, and have mercy on our souls!

lidiya phillips7/17/2015 6:48 am
It is just now that it is being signed into Law. The support for single pregnant women has been provided by the Orthodox Church of Russia since 2008 or 2009. It is a real success. The Church completely takes care of those girls. They are offered a choice to keep their babies or give them up for adoption after giving birth. Government provides free housing, helps to find jobs, provides a lump sum cash, called "Maternity Capital", which is meant to pay for the child's education after High School graduation, if they decide to keep their babies. People donate furniture, clothing, food, medications, money, even houses to the Holy Synodal Dpt for Church Charity & Social Services, which provides this care. They totally love it. And no one can stop them from doing God's work: it's their country, their cities and towns, and their children.

Mary Jo Hemesath7/16/2015 7:17 pm
I would gladly sign a petition for Russia to not let abortions continue in their country but I didn't see any.
I will pray for them and for all countries to stop this
crime against god - neighbor - nature Mary Jo

I pray that a Pope with his bishops, will at last, consecrate Russia to the Immaculate Heart of Mary, and then Russia will save this world, and a period of peace will be experienced to all.