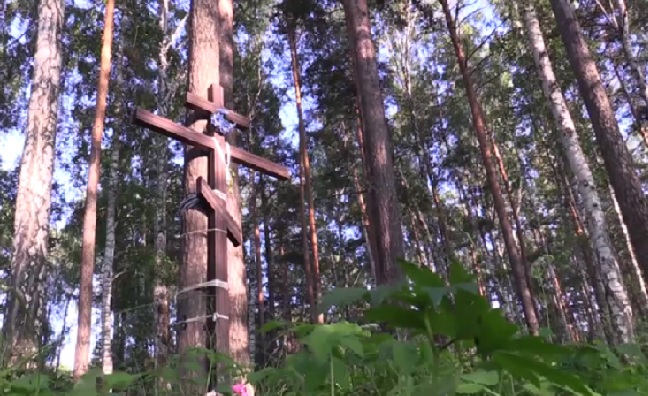 The damaged memorial cross has been tied and nailed to a nearby tree. What kind of "human" desecrates the grave of murdered innocents?

A week before the 97th anniversary of the murders of Emperor Nicholas II and his family, the memorial cross which marks the spot where the remains of Tsesarevich Alexei and Grand Duchess Maria were discovered has been vandalized yet again.

Russian media reported on July 9th, that the vandals had ripped the memorial cross from the ground and thrown it into the woods.

The State Ministry of Internal Affairs, and the Sverdlovsk regional police have launched an investigation into this latest act of vandalism.

“This is now the third time that the memorial cross has been vandalized” - said Nikolai Neuimin, an employee of the Sverdlovsk Regional Historical Museum. “The damage this time will not permit us to place it back in the ground, so we had to tie and nail it to a nearby tree” - he added.

In June 2014, a resolution was passed by the Sverdlovsk regional government, designated the site where the remains of the family of Russia's last tsar Nicholas II and members of his family were found on the national cultural heritage list, and is now included in the state register of protected sites. Over 40,000 gather in Ekaterinburg to honor the Royal Martyrs