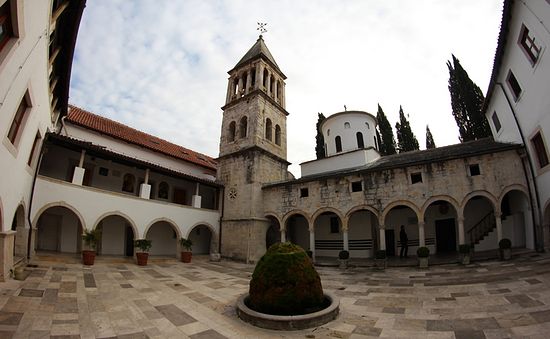 This historical role was given to the superior of Krka, Joakim, who “was very skilful and well educated … He energetically strived to have the younger Dalmatian priests” become better and more skilled in performing their pastoral duties. Yet, this wish to establish a theo­logical seminary in the monastery Krka, was not accidental. Throughout its long history, this monastery was a transcribing center, a spiritual center and a place of gathering for the Serbs in Dalmatia. An Akathist was transcribed in the monastery Krka in 1557, and in 1597 as many as three liturgical-theological books were written: an Akathist, Prayer-book and Prologue. In 1601, twelve Menaions were transcribed.

Over the years this oldest theological school of the Serbian Orthodox Church changed its location. At the time of Patriarch Josif Rajacic in 1833, the Seminary worked in Imenik, and in 1841 it continued its work in Zadar. With the annexation of Zadar to Italy in 1920, the Theological Seminary stopped working.

In 1964, the Holy Synod of the Serbian Orthodox Church decided to renew the seminary in monastery Krka. Further more, the two-year theological seminary, which existed until 1970, started its work the same year. The principal of the two-grade theological seminary was hieromonk Nikolaj Mrdja (today the Metropolitan of Dabar-Bosnia), and the teachers were hieromonk Artemije Radosavljevi (to­day the Bishop of Raško-Prizren) and hieromonk Lavrentije Trifunovic (today the Bishop of Sabac).

There were many difficulties in the beginning but also a lot of enthusiasm. The pupils had to be accommodated in the modest monastery chambers, and the classrooms had to be adapted, as did everything else necessary for a boarding school. Yet, in 1966 Serbian Patri­arch German, together with members of the Holy Synod, vis­ited monastery Krka and he came to this sanctuary, as he himself said, “to light the icon lamp of the new theological school.” That year, apart from a two-year semi­nary, a five-year one also started its work. In the 1967/68 school year there were 122 pupils and in the next school year there were 154 seminarians. In autumn 1970, the seminary organized its first excursion for the pupils attending the 5th grade. In 1972, the Three Holy Hierarchs were taken as the protectors of the theological seminary.

Three Holy Hierarchs Seminary works in the monas­tery Krka even today. Due to the efforts of Bishop of Dalmatia Stefan Boca (1959-1978) this oldest Serbian theological school was successfully renewed. It should espe­cially be pointed out that this spiritual school has so far given hundreds of Ortho­dox priests, a large number of monks, and dozens of reputable bishops to the Ser­bian Orthodox Church.

The consecration of the foundations for the new seminary was celebrated on the Feast of the Archangel Michael in 1985. On that occasion a stone from the Pec Patriarchate, stones from the monasteries Krka, Krupa, Dragovi and Rmanj, as well as the stones from the towns of Imenik, Benkovac and Zadar were built into the foundations of the seminary's new building. This holy and historical act was celebrated by the Metropolitan of Zagreb-Ljubljana Jovan and the Bishop of Dalmatia Nikolaj together with the monastery’s brotherhood, pupils, teachers and the faithful.

The consecration of the new building of the seminary was celebrated in 1989 on the 600th anniversary of the Kosovo Battle.

In August 1995, the Theological Seminary of the Three Holy Hierarchs was closed. Because of well-known hystorical circumstances, the Seminary continued its work in Divicbare and later in Srbinje.

In 2001, it was again moved to its historical centre – the monastery Krka.

The Information Service of the Serbian Orthodox Church