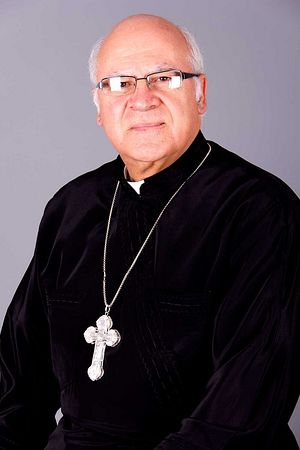 In August, I was privileged to attend the annual Eagle River Institute at St. John Orthodox Cathedral in Eagle. I was fascinated to hear a series of lectures on “Christianity in the Arab World” by the Rev. George H. Shaloub, pastor of The Basilica of St. Mary Antiochian Orthodox Church in Livonia, Michigan. Shaloub was raised in Syria, and trained at a monastery in Lebanon.

Before returning to Livonia, Shaloub graciously fielded some questions on religious diversity, eschatology, monasticism and marriage. Early in our conversation, I mentioned a Pew Research global religious diversity study from last year that, based on 2010 data, found that 31.5 percent of the world’s population identified as Christian, compared to 23 percent as Muslim and predicted Muslims will exceed Christians by 2050. Shaloub said the constant conflict in the Middle East had uprooted many Christians, and noted the loss of faith in Europe and decreasing family sizes.

What follows is a condensed and edited version of our exchange.

Does all this herald the imminent return of Christ?

“In the Orthodox tradition, we do not time the return of Christ. That would be against our faith. We have no control and we cannot predict. Now, there are so many stories in the Old Testament and in the Book of Revelation that can allude to circumstances. The Orthodox Church never interprets these ancient texts or symbolism as to relate to the present time. The Orthodox Church believes that all what’s written in the Old Testament and the book of Revelation is the fulfillment of God’s promise to send his son Jesus. So we do not look at the world as a subject to be interpreted by Scripture. The Scripture can only be a map of salvation for us, without taking in all contexts at this time.”

But many Christians play up end-time possibilities.

“No stress, I always tell -- if the Lord comes today, it would spare me paying the mortgage of the church of $3.4 million. If He chooses not to come, let Christ be Christ. There’s a tendency always here, we play God, and we play the Lord. We tend to put him in the box and limit him; therefore our own limitation. This is not part of our practice. People are looking for an answer why there is a war in Ukraine and war in the Middle East. The war is in our own inner city, not far from our doorsteps in America. That is a reflection of what’s going on. Let’s fix our home first.”

Continuing, he observed evangelicals perceive far away things as more healing, so they go to Africa and South America, when Detroit and Anchorage really need the help. “Charity begins at home. But in America, as a great power, a great influence, it does not pay to show our power and influence in our backyard. It is always on the world stage, because this is where America’s foreign policies interest lies.”

How do you address these issues in your ministry?

“We address it from three perspectives. One perspective, from my homily, is that we do not live alone in the world. If I’m to be a Christian, I have to fulfill God’s greatest commandment. It’s not enough to live for God. I have to look after my neighbor, whether he’s godly or ungodly. The second thing is in your community’s participation. You reach out and you work; whether in the soup kitchen, whether to collect blankets for the homeless in winter, clothes for children, or to feed the hungry. The third is to reach out to the religious leaders in your own community because the religious leaders have a lot of influence.”

What about monasticism’s role in early growth of Christianity?

“In the early days, third to seventh century, the piety of the Christian life was overwhelming. Men and women would leave the hustle and bustle of everyday life, called to become monks and nuns. They chose the desert because it either gave you life or made you naked -- it would kill you. It was a very hostile environment, a testing ground about the endurance of the Christian. In the desert, most of our hymnology, most of the ‘yeast,’ that fermented the dough for the entire Christian world, came from the desert.”

Does a role for monasticism still exist?

“Absolutely, because what is missing from our Christian life is this deep spirituality. This can only come from one person chosen by God to dedicate his or her life to the life of prayer. Monastic life can be lived in your own married life but you cannot devote all of your life to a life of prayer. You have the worry of family, children, money, payments. A monastic person’s call is to pray for all of us. We need to have this prayer of intercession. We need people to pray for the world instead of fixing up the world. We don’t know how to fix the world.”

I understand you had an arranged marriage and have authored a book on marriage. Could you share some thoughts on strengthening marriage?

Married Life and Asceticism
Deacon Pavel Serzhantov
It all began with our forefathers, Adam and Eve. They received a commandment in paradise not to taste of the tree of the knowledge of good and evil (cf. 2:17). The commandment not to “taste of this or that” is quite well known to any Orthodox Christian. This is the commandment to fast—the most ancient, beginning factor of family life. Altai Youths Honor "Family, Love, and Faithfulness"
The Altai regional youth organization, "Word," will conduct a community action according to their tradition of honoring "family, love, and faithfulness" on July 7 and 8, reports the Barnaul Diocesan website.
Comments
×