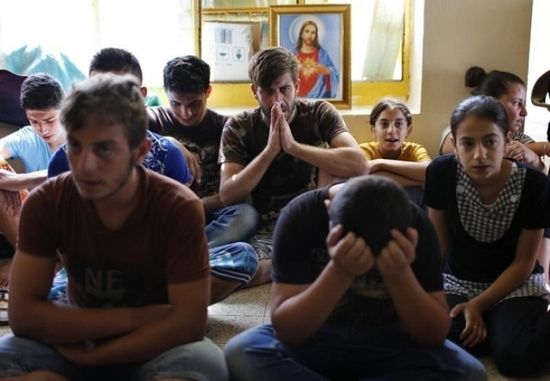 Displaced Iraq Christians who fled from Islamic State militants in Mosul, pray at a school acting as a refugee camp in Erbil September 6, 2014. Read more at http://www.christianpost.com/news/christian-population-in-iraq-in-danger-of-being-eradicated-in-5-years-147947/#AD1g12TtC1clWDDm.99

The Christian population in Iraq is in danger of being extinct in about five years, a recent report from an international Catholic charity organization says.

At present, there are only around 300,000 Christians left in Iraq from over a million in 2002. The Aid to the Church in Need released a new report saying Iraq's Christian population faces extinction in five years, especially after 120,000 of them are being forced to convert to Islam or die, according to Rome Reports.

If the Islamic State of Iraq and Syria (ISIS) is not stopped, the Christian population in Iraq could be eradicated by the year 2020. Those in Syria also face serious threat to their lives, Sputnik News reports.

In the report titled "Persecuted and Forgotten," Aid to the Church in Need documents the persecution of Christians in Iraq from 2013 up to the present. The UK-based charity enumerates 10 countries in which Christians suffer the worst persecution and Iraq, Nigeria, Sudan, and Syria topped the list. The other countries in the list include China, Eritrea, Iran, Saudi Arabia, Pakistan, and North Korea, the report details.

While half of the remaining Christians in Iraq are now struggling to choose between embracing Islam or remaining faithful to their religion, many of them want to flee to other countries because of the danger that the ISIS poses to them. Every year, the Christian population reduces by 60,000–100,000, the report adds.

The report also identified Islamic fundamentalism as the main cause of Christian persecution in the aforementioned countries. But in China — a non-Islamic nation — the government detained over 400 religious leaders in 2014 alone.

In North Korea, 33 Christians have been accused of being spies and executed starting march 2014. There are about 400,000 Christians in the countries, and a tenth of them have reportedly been sent to labor camps where they are tortured, experimented on, or killed. Vicar of Baghdad Says Christians Are 'Desperate' and 'Petrified' by ISIS, but Worship and Love for Jesus Sustains Persecuted Believers

Vicar of Baghdad Says Christians Are 'Desperate' and 'Petrified' by ISIS, but Worship and Love for Jesus Sustains Persecuted Believers
The Rev. Canon Andrew White, known as the "Vicar of Baghdad," has said that persecution of Christians at the hands of ISIS in Iraq has passed all expectations of extreme brutality.