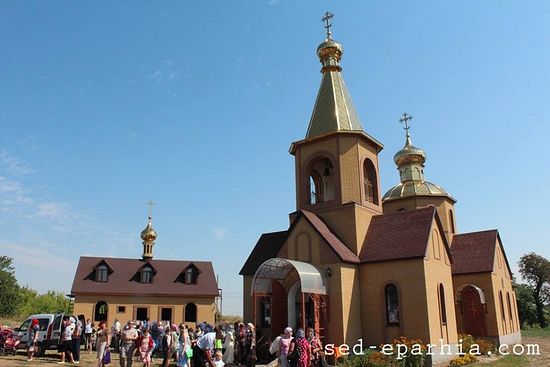 A church guard of the Church of Three Ecumenical Holy Fathers in the town of Popasnaya of the Ukrainian Lugansk Region Leonid Zheleznyakov was shot by a Ukrainian soldier.

"The autopsy has shown thate there were seven bullets from a Makarov pistol: in the temple, jaw, hip and hand. There were no traces of struggling or robbery. The murderer(s) made no attempt to hide the traces of the crime, which proves that he was assured of impunity," rector of the church and nephew of the murdered guard Archpriest Alexander Strebakov told Interfax-Religion.

The crime was committed in the church guardhouse. Militia are searching for the suspect.

"The motive of the crime can be nothing other than hatred for the Moscow Patriarchate. According to the officers, the murderer is an adherent of the ‘Kiev Patriarchate’," said Fr. Alexander to Interfax. A Brutal Ordeal. A Monk Talks about his Torture
“It was an exceedingly dismal place,” he comments. Thrown into a basement “cell”, he could see on the floor a huge pool of blood that had been haphazardly swept. “I don’t know whether a man was killed there or just badly beaten, but it was obvious that he lost nearly all his blood.”This, however, was only the holding chamber before the torture chamber. The worse was yet to come.
Comments
×