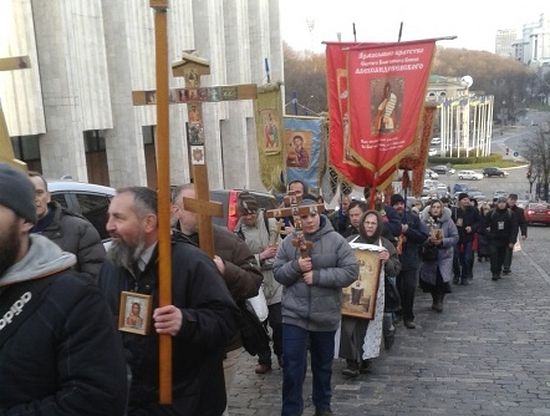 Participants of the procession of the cross on Sunday, the feast-day of the Holy and Right-Believing Prince Alexander Nevsky, held a picket near the embassy of the Vatican in Kiev, reports Interfax-Religion.

The Orthodox protesters carried placards which read: “No to the Vatican’s proselytism in Orthodox Ukraine!” and “A visit on the canonical territory of the Russian Orthodox Church without receiving its permission is a violation of the Church rules!”

They also submitted an appeal to the Apostolic Nuncio in the Ukraine Archbishop Claudio Gugerotti explaining that the Ukrainian President Petro Poroshenko during his visit to the Vatican City on November 20 this year had invited Pope Francis I to visit the Ukraine.

“The pontiff officially accepted this invitation. It means that the supposed visit of Francis I to the Ukraine will take place at the time on which the Ministry of Foreign Affairs of the Ukraine and the Vatican will agree,” the document reads.

The authors of the appeal noted that a visit of the Pope of Rome to any country is usually organized as a pastoral and missionary trip and, according to the rules of the interchurch relationships, such a visit on the territory of another Church should necessarily be agreed upon with its Church hierarchy.

The embassy of Vatican became the last point of the cross procession in which several hundred of people participated. They marched across the Ukrainian capital’s central streets from the Kiev Caves Lavra and performed a prayerful standing on the site of the former tent Church of St. Alexander Nevsky. The latter had been demolished by the authorities back in 2011 and now a memorial cross had been erected on that spot. The Ukraine needs its “own” Church, Petro Poroshenko says

The Ukraine needs its “own” Church, Petro Poroshenko says
The Ukrainian President Petro Poroshenko believes that a “Local Orthodox Church” should be established on the territory of the Ukraine and relies upon the support of the Ecumenical Patriarch in this respect. Putin ready to discuss situation in Ukraine with Pope Francis - Peskov
President Vladimir Putin will be ready to explain in talks with Pope Benedict the essence of Russia's position on the situation in southeastern Ukraine, said Kremlin spokesman Dmitry Peskov.

Metropolitan tells Poroshenko that Orthodox churches are being seized illegally
Chancellor of the Ukrainian Orthodox Church (Moscow Patriarchate) Metropolitan of Borispol and Brovary Antony has complained to Ukrainian President Pyotr Poroshenko that numerous church buildings had been illegally seized from the church by force.
Comments

Sultana Frazis12/9/2015 8:29 pm
Historically, from the time that the Western Christians decided to separate from the Mother Church which we refer to as the Orthodox Church, the Western,Latin, Catholic(Greek word meaning universal) Church has made every direct and indirect effort to convert us Orthodox and absorb us. If they would like unity, then they should realize and accept the historical facts, what they did, and come under the Ecumenical Patriarchate. The Crusades was basically to gain land and money and help to destroy the Eastern/Greek Orthodox Church. If anyone has a problem with this information, I strongly and respectfully suggest that the read unbiased history books on the subject and then reconsider their thoughts. God bless us and protect us all, as we are all his children, regardless of denomination.
×