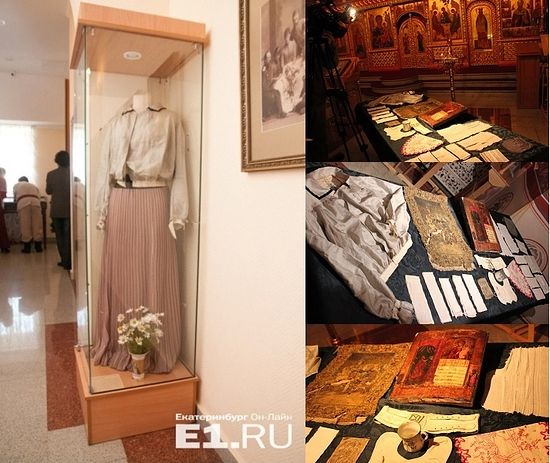 On 18 December, a number of personal items belonging to Grand Duchess Elizabeth Feodorovna were presented to the Museum of the Holy Royal Martyrs in Ekaterinburg. The items, from the private collection of Nina Mikhailovna Moleva were originally brought to Ekaterinburg for the annual Tsar’s Days Festival in July 2014. Earlier this week, they were transferred for permanent storage in the Museum of the Holy Royal Martyrs, situated in the Patriarchal Compound adjacent to the Church on the Blood in Ekaterinburg.

Nina Moleva, who marked her 90th birthday on 5 December is a doctor of historical sciences, candidate of art history, professor, and member of the Union of Writers and Artists Union of Russia. She married the Russian avant-garde artist and art theorist Elia Belutin (now deceased). Avid collectors, their Moscow apartment holds a priceless collections of Russian and world works of art. 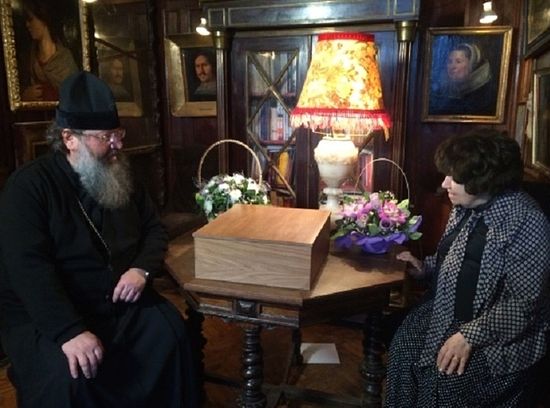 On December 11 2015, Metropolitan Kirill of Ekaterinburg and Verkhoturye met with Nina Mikhailovna Molev at her apartment in Moscow. She presented Metropolitan Kirill with a wooden box containing the personal items belonging to Grand Duchess Elizabeth Feodorovna, to be donated to the Museum of the Holy Royal Martyrs in Ekaterinburg.

The personal items which once belonged to Grand Duchess Elizabeth Feodorovna, had been preserved for decades by Nina Molev’s family. The items had been collected from the private chambers of Elizabeth Feodorovna, after the closure of the Martha and Mary Convent in Moscow. During Soviet times, the contents of the box were hidden from prying eyes, for it was forbidden to own such artefacts associated with the royal family, particularly during the Stalinist years.

Among the items are a blouse, belt and gloves worn by the Grand Duchess. Also in the collection is an icon of the Mother of God, which belonged to the Empress Alexandra Feodorovna. "Nina has chosen our city, because Ekaterinburg has become the center of Orthodox Russia in the Urals!" - Said Archpriest Maxim Minyailo.

Staff carefully unpack the precious box containing the personal items of Grand Duchess Elizabeth Feodorovna, and place them in a display case at the Museum of the Holy Royal Martyrs in Ekaterinburg.

Grand Duchess Elizabeth Feodorovna (Princess Elizabeth of Hesse-Darmstadt) was born on November 1, 1864 in Darmstadt. In 1884 she married Grand Duke Sergei Alexandrovich, brother of Emperor Alexander III, and adopted the Orthodox faith in 1891. After the murder of her husband by terrorists in February 1905, she devoted her life to charity. She founded the Martha and Mary Convent in Moscow and became its Abbess. In 1918 she was arrested and later murdered at Alapaevsk in the Urals. Her body, along with other members of the Russian Imperial family were dumped in a mine. Elisabeth was canonized by the Russian Orthodox Church Outside of Russia in 1981, and in 1992 by the Moscow Patriarchate. The relics of the Grand Duchess are buried in the Church of Mary Magdalene in Jerusalem. Exhibition: Moscow - The Holy Land of the Grand Duke Sergey Alexandrovich and Grand Duchess Elisabeth Fedorovna
More than 30 participants, such as Moscow and regional museums, monasteries of the Holy Land, archives, private collectors, have provided about 400 exhibits for the exhibition. On display there are historical relics: the personal items of the Grand Duke and Duchess, their gifts to museums of Moscow and contributions to the Churches of the Holy Land, documents, photographs, works of art.

Thirty-three Portraits of Grand Duchess Elizabeth
Photogallery
November 1, 2014 marks the 150-year anniversary since the birth of Royal Martyr Elizabeth Feodorovna, one of the Russian people’s favorite saints, and honored all over the world.
Comments
×