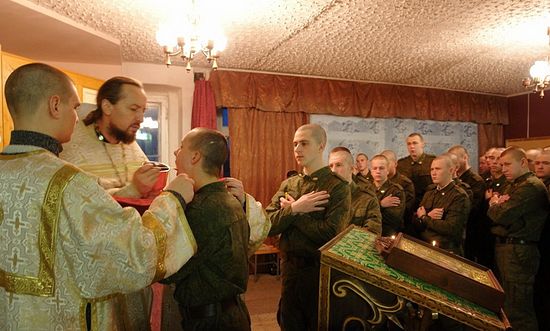 The percentage of believers among the servicemen in the Russia’s Armed Forces has increased more than twice since 2001 and now they make up 76 percent of the total number of military men, reported head of Directorate for working with religious servicemen at the Chief Directorate for educational work in the Russian army Alexander Surovtsev on Tuesday to the journalists.

“In 2001 only 37 percent of servicemen, when asked if they considered themselves believers, answered yes, and in 2015 as many as 76 percent gave a positive answer,” said A. Surovtsev at the annual international Nativity Educational Readings at the Military Academy of the General Staff of the Russian Federation’s Armed Forces.

“The number of Muslims serving in the Armed Forces has nearly halved compared to last year but it has to do with the specificity of the conscription campaigns,” A. Surovtsev noted.

According to him, the rates of Buddhists and representatives of various Protestant denominations slightly increased in the army over 2015, but still they make up only “several percent or less than 1 percent” of the overall number of the believers.