The World Loves its Own 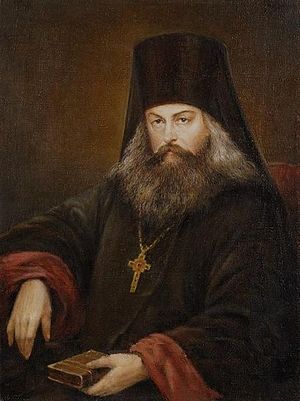 St. Ignatius (Brianchaninov)
Concerning the truth and harmony between the teachings of the Fathers of the Eastern Church and Holy Scripture, and about the false direction of the ascetics of the Western Church and their writings.

I am now bow reading books I have In Slavonic, Russian and other Ianguages. Included among them is the Collected Sayings of the Holy Desert Dwellers of Egypt. These sayings are priceless pearls! Deep sea divers plunge into the depths of the ocean to find precious pearls. The holy Fathers withdrew into the depths of the desert and delving deeply into themselves they found diverse priceless spiritual pearls: Christ-like humility, childlike simplicity and lack of guile, angelic dispassion, spiritual wisdom and discernment. In a word, they discovered the Gospel.

Today I read a saying of Saint Sisoes the Great which I have always liked and which has always been particularly close to my heart. A certain monk said to him, “I abide in the constant remembrance of God." Sisoes answered him, "That is not greatness—it will be something great when you consider yourself to be the least of all creation." Constant remembrance of God is a lofty exercise, but that height is very dangerous when the ladder reaching up to it is not founded on the firm rock of humility.

See how the Scriptures are in harmony with the Fathers! Scripture says, With whole burnt offerings Thou shalt not be pleased, a sacrifice unto God is a broken spirit; a heart that is broken and humbled God will nor despise (Ps. 50:16f). Sacrifices and even the whole-burnt offerings from man must be founded on a sense of spiritual poverty and repentance. Without them they are not accepted by God.

I am also very fond of one of Saint Pimen the Great's sayings: “If we always blame ourselves, in everything, then we will always be at peace." Another Father observed: "We have put down the light yoke of blaming ourselves and have taken up the heavy one, that of blaming others." Such sayings are worth whole books. Nobody, it seems, has entered into the Gospel as the holy desert dwellers have. They strove to realize the Gospel in life itself. Deep humility was characteristic of them. Fallen nature was a constant topic for thought and they wept constantly over their sins.

Since the time of the schism from the Eastern Church and its fall Into the destructive darkness of heresy, the ascetics of the Western Church and its writers on asceticism have taken a different direction. Saints Benedict and Gregory the Dialogist were in harmony with the ascetic guides of the East, but already Bernard of Clairvaux began to differ sharply and later Western fathers strayed even further. They are immediately attracted and attract their readers to heights unattainable by beginners. Carried away by their enthusiasm, they carry away their readers, mistaking fiery, often excited, flights of fancy for Grace. By their fruits ye shall know them, said the Savior. Everybody is familiar with the atrocities, rivers of blood, and decisively anti-christian behavior that has resulted from this distorted way of thinking and distasteful emotionalism of Western fanatics.

By contrast, the holy Fathers of the Eastern Church draw their reader not into the embrace of love or of lofty vision, but rather to a close examination of his sins and his fallen nature, to confession of the Redeemer, to lamentation over himself before the merciful Creator. First of all they teach restraint of all impure inclinations—they seek to remove the weight of fleshly desires and make the body light and capable of spiritual action. Then they tum to the mind, setting aright its thoughts and understanding, cleansing it of thoughts causal by our fallen human nature and replacing them with thoughts of renewed human nature as characterized by the Gospel. From correcting the mind the holy Fathers move to Correcting the heart, to transforming its habits and perceptions. To cleanse the heart is far more difficult than to cleanse the mind. The mind, convinced of the correctness of the new thought, easily casts aside the old and quickly takes possession of the new. But the exchange of habit for habit, nature for nature, one feeling for a different or opposite feeling—that is hard work! It is a constant struggle, an incredible battle. The ferocity of the warfare is expressed by the Fathers thus: Give blood and receive the spirit. One needs to bring the body and the mind under the control of the spirit.

The blood and the nerves are stirred up by the passions—anger, love of money, sensuality, and vainglory. The latter two particularly heat the blood of the would-be ascetic who fails to follow the path of the desert Fathers in his spiritual struggle. Sensuality and vainglory turn the misguided beginner into an ecstatic fanatic. Vainglory pushes him into a spiritual state far beyond his powers. In an impure state, standing outside the truth, he cannot fail to delude himself. The impulses of sensuality, combined with the force of vainglory, deceive the heart with false consolation, sweetness, and inebriation. This is a state of complete self-deception. All strugglers who fail to follow the teaching of the desert Fathers are in such a state. Their self-delusion expands and contracts according to their efforts—increased struggle results in increased delusion. Numerous books flow from the pens of Western writers held captive in such deluded states. The blind, proud world, considering itself spiritually elevated, hungrily pounces on these books and proclaims them eminently holy and spiritual, worthy to stand next to Holy Scripture.

The world loves its own, said the Lord. The works of Western authors. written in this state of self-delusion attract an enormous number of readers. They are translated repeatedly into various languages and enjoy much praise. Works seeping with deadly poison are approved of and recommended while the writings of the Holy Fathers are forgotten! The true path of ascetic life, recognized from days of old, is no longer respected. Their writings are criticized, are said to contradict and disagree with Holy Scripture. This is so because the holy Fathers were under the direction of the Holy Spirit, because they renounced the wisdom of the world so as to attain the wisdom of the Spirit. In vain are the attempts of those who go against the teachings of the Apostles, who go against the teaching of the Church, endeavoring to enter the wisdom of the Spirit by means of the wisdom of the world. He taketh the wise in their own craftiness (1 Cor. 3:19). Having fallen, great was the fall thereof. They want to explain things “spiritual” according to the darkened reasoning powers of the soul The “spiritual" as it appears In the works of the Holy Fathers seems strange to them, contradicting Holy Scripture. Spiritual things are compared with spiritual things, said the Apostle Paul, but the natural man receiveth not the things of the Spirit of God: for they are foolishness unto him: neither can he know them, because they are spiritually discerned (I Cor. 2:13f).

Translated from A Collection of Letters by Bishop Ignaty Brianchaninov pp. 421-425 Individual Revelation and Its Indications
Alexei Ilyich Osipov
The methodical development of imagination is based in the experience of one of the pillars of Catholic mysticism, the founder of the order of Jesuits and great Catholic saint Ignatius of Loyola (sixteenth century). His book Spiritual Exercises enjoys great authority in Catholicism. Ignatius himself said of his book that if one reads it, it could replace the Gospels. He tells the reader to imagine the crucified Christ, to attempt to penetrate the world of Christ’s feelings and sufferings, to mentally converse with the Crucified One, etc. All this contradicts in principle the basics of spiritual ascetic labor as it has been given to us in the lives of the saints of the Universal Church.
Comments
×