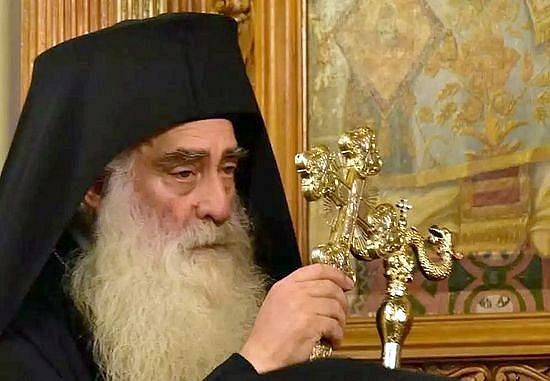 AgionOros.ru has published the main points from an article by Metropolitan Paul of Sisanion and Siatista which has provoked a wide response in Greece.

According to the hierarch, “the Greek rulers for many years have been committing crimes against the motherland and the nation. Not only did they ruin the Greek economy, but they also corrupted the people in order to retain power and enjoy its fruits.”

“The authorities deliberately used the human passions so as to deprave the nation. This was achieved by means of the TV channels under their control … The corrupted nation has become a captive of the imposed dream. Some are dreaming of the return of ‘the wonderful time’ of comfort and pleasures. None of the politicians have the courage to say the truth, that these times will never return because they were the times of unlawfulness.”

“The fall of Greece was planned, and the Greek politicians participated in this process … Consumerism has become the purpose of life. Greeks have been goaded into this by hook and crook. Loans to go on holiday, loans for celebrations. Loans, loans, loans … Didn’t the powers that be realize how all this would end up?”

“At the same time the Church faced a storm of criticism. The TV channels which served foreign interests and the interests of the authorities did their best to destroy the link between the Greek nation and the source of life and strength.

“The politicians spoke much about ‘a substantial amount of Church property’ which they themselves have stolen.

The Church has given up 96% of its resources to the people. But where is all this now? Does it belong to the people or ended up in someone’s pockets? No one has had enough courage to carry out a respective investigation yet.”

“The authorities have gotten their way, and that is its crime. It has depraved the people to make them be silent and obey.

The rulers have also partly succeeded in slandering the Church and setting the people against it, like Emperor Nero who burned down the city of Rome and then accused Christians of his own crime …”

“The government has become an instrument in the hands of foreigners and has made efforts to eliminate the language, the historical memory, the faith in God, aiming to crush and completely subdue the Greek population which has become a prisoner of delusive dreams and empty promises.

The politicians will not find a way out of this situation. The way out will only be found when the people realize their responsibility for the state of affairs, when society realizes that now any solution to the problem will not be painless, when it is determined to act together and not separately.”