Brussels went into lockdown on Tuesday after a series of explosions rocked the city's airport and subway, leaving at least 26 dead in what appeared to be a coordinated attack.

Officials raised the terror threat level, shut down all public transport in the city and advised locals to stay indoors after the blasts, which also wounded dozens.

Belgium's federal prosecutor said one of two explosions at the airport was likely caused by a suicide bomber and that all three blasts were acts of terrorism.

The attacks followed a flurry of counterterrorism activity in Brussels and a raid Friday that captured Europe's most wanted man — Salah Abdeslam — in connection with the Paris terror attacks.

Authorities confirmed an explosion at Maalbeck metro station killed at least 15 people and injured 55 others. The country's ministry of health confirmed that at least 11 people had been killed at the airport.

The first blast hit the airport's departures hall at around 8 a.m. local time (3 a.m. ET) and was quickly followed by a second explosion, sending passengers fleeing. 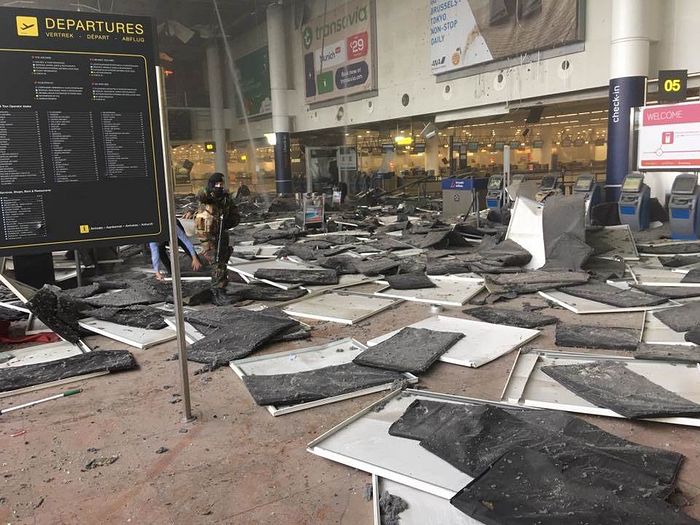 A security source told NBC News that one of the airport explosions happened in Departure Hall 1, which is used by international carriers including American Airlines. The carrier said none of its employees or crew had been injured by the blasts.

Eyewitness Jef Versele was checking in for a business trip to Rome when he heard a blast.

"Soon after that one a second one hit — and everything came down," he told NBC News. "There was dust everywhere, glass everywhere, there was chaos. There were people on the floor everywhere. The roofing came down. It was quite a mess."

The Belgian army joined a massive emergency-services response, which saw roads and public transportation leading to the airport closed and all incoming flights were diverted.

Less than an hour after the blasts hit Zavantem airport, an explosion hit a subway car in the Maalbeck station — located near the European Union's main buildings.

Images posted on social media showed smoke pouring out of the station and injured people receiving medical treatment on the sidewalk outside.

Michael Ryan, head of the EU delegation to Rwanda, was coming up the escalator at another station just a few hundred feet away when he felt a "soft boom."

"The air pressure from the explosion went up the line and rattled everything," he told NBC News. "Everything is tense here." 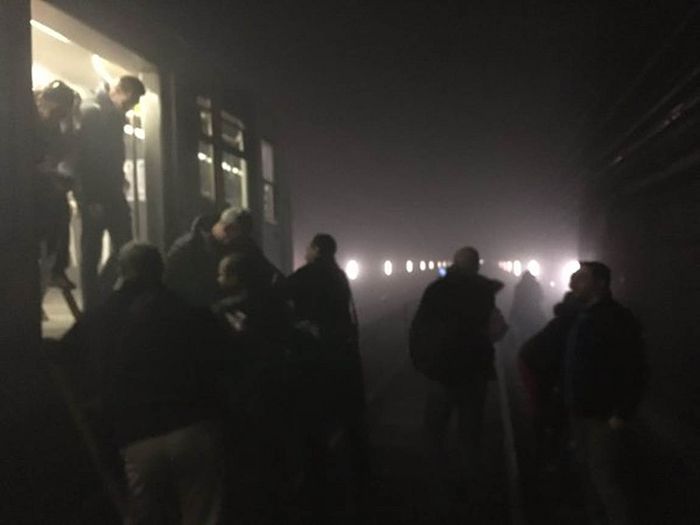 All trains, planes, trams and buses were halted in Brussels. The main Midi train station was evacuated and ambulances raced through the streets of the Belgian capital.

Sunita Van Heers had come to the train station after seeing the metro was on lockdown. Then police evacuated the station.

"Everybody started panicking, crying, not knowing what was happening," she said, describing how police ordered people away from the station. "It's scary."

The rapidly unfolding crisis caused cellphone networks in Brussels to jam, with officials urging people to use WhatsApp or Twitter because the networks were becoming saturated. Belgium's crisis center advised locals to stay home or in their workplaces, telling schools to keep students indoors.

Counterterrorism officials told NBC News that the location and timing of the attacks reflected a "shocking" level of unpreparedness on the part of Belgian officials following the Abdeslam raid.

Alleged Paris attacker Abdeslam was taken into custody along with several others on Friday. His capture has been seen as a potential goldmine of information for intelligence services — if he cooperates.

The 26-year-old and several of the attackers who laid siege to Paris on Nov. 13 had ties to Belgium.

On Monday, officials named another potential suspect and asked for public assistance in locating him.

Belgium's foreign minister said following Abdeslam's arrest that the suspect had been planning to "restart something" in Brussels — the suggestion of a new attack that was taken all the more seriously given the large amounts of heavy weapons found during his arrest.

There was no formal claim of responsibility for Tuesday's blasts — and one senior European counter-terrorism official told NBC News that authorities were scrambling to determine who was behind the assault.

"We have no clue yet," the official told NBC News. "Right now, we are trying to mount a defense." Calling Christian genocide by its name
“Genocide” is a word, like “Hitler,” that is used carelessly in the heat of a campaign as a synonym for prejudice, partisanship and persecution of minorities. But despite all the evidence at hand, President Obama stubbornly refuses to call the persecution and systematic annihilation of Christians in the Middle East by its right name, genocide. Husband of Muslim Nanny Who Beheaded 4-Y-O Girl Arrested, Suspected of Radicalizing Wife With Islamic Law
The couple's eldest son told authorities that 48-year-old Mamur Dzhurakulov married the nanny, Gyulchekhra Bobokulova, in a Shariah ceremony, which sparked a dramatic transformation in her.
Comments
×