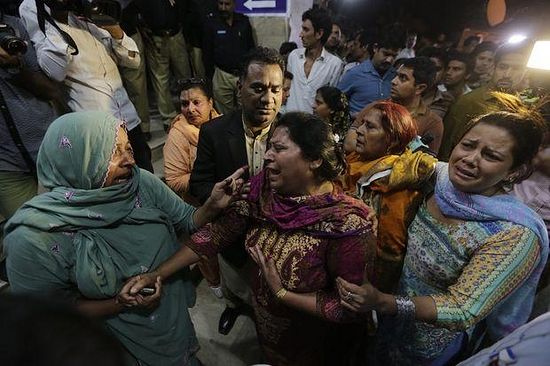 Pakistan’s leaders vowed a quick response after a Taliban suicide bomber targeted many women and children celebrating Easter Sunday at a park in one of its biggest cities, the nation’s deadliest attack since a school massacre in 2014.

The blast killed at least 66 people and injured 340, police inspector Shahid Mahmood said by phone on Monday. An offshoot of the Pakistani Taliban claimed responsibility and said the group was targeting Christians, the Washington Post reported, citing a spokesman.

Prime Minister Nawaz Sharif called for a united fight against terrorism after the blast, a refrain he has repeated often in the face of a Taliban insurgency that has killed more than 60,000 people since 2001. This one hit close to home: Punjab, the nation’s most populous state, is Sharif’s political base and has seen fewer attacks than areas closer to the mountainous border with Afghanistan.

"Those who targeted innocent citizens do not deserve to be called humans," Shehbaz Sharif, Punjab’s chief minister and Nawaz Sharif’s brother, wrote on Twitter. "We will come after you. We will hunt you down. We will make sure that your terror infrastructure is dismantled completely."

Pakistani television showed a video of people running from the Gulshan-e-Iqbal park in a residential part of Lahore. The area was crowded with Christians, and many families were leaving when the blast occurred, according to reports.

The attack highlights the challenges Nawaz Sharif faces in eradicating terrorism in Pakistan, where the military has long used extremist groups as strategic assets against India to the east and Afghanistan to the west. Sharif has sought to take on Pakistan’s conservative elements in recent months, calling for better treatment of women and executing a man who assassinated a former governor for seeking a review of a blasphemy law.

Nawaz Sharif, who took power in 2013, termed the attack as cowardly and said it was a reaction to the government’s success in the fight against terrorism. The Lahore deputy commissioner’s office said Nawaz Sharif visited the city on Monday to review the situation.

The attack occurred as thousands rallied in the capital Islamabad to protest the execution of Mumtaz Qadri, who murdered the former governor of Punjab in 2011 over his stance on the blasphemy law. The protesters called for the imposition of Shariah law and wanted Qadri to be declared a martyr.

Although Pakistan was created for Muslims as part of a two-state solution following independence from the British in 1947, military ruler Zia ul Haq imposed more stringent Islamic laws only in the 1980s. Religious minorities -- including Hindus, Christians and Shia Muslims -- have been frequent targets of sectarian violence.

“The United States condemns in the strongest terms today’s appalling terrorist attack,” U.S. State Department spokesman John Kirby said in an e-mailed statement. “Attacks like these only deepen our shared resolve to defeat terrorism around the world.”

Sunday’s attack was Pakistan’s deadliest since 2014, when the Taliban massacred about 150 -- mostly students -- in their school, according to the South Asia Terrorism Portal. It was the deadliest in Lahore since 2010, when a bombing killed almost 100 members of the minority Ahmadi Muslim community. Fifty Countries Named to Christian Hall of Shame; 2015 Was Worst Yr. Ever for Christian Persecution
With North Korea leading the way and Islamic extremism rapidly expanding, 2015 was the "worst year in modern history for Christian persecution," the Religion News website reports today.
Comments
×