Head of the Russian Imperial House Arrives in Crimea 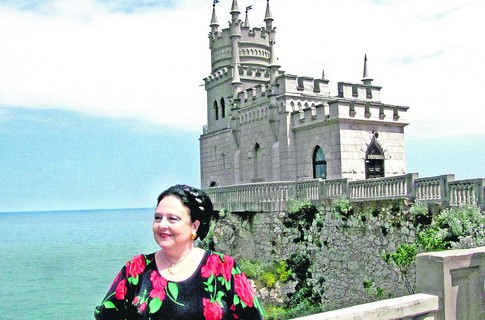 The Head of the Russian Imperial House Grand Duchess Maria Vladimirovna and her son Grand Duke Georgii Mikhailovich have arrived in the Crimea on an official visit — the first after the historic reunification of the peninsula to the Russian Federation in 2014. Their Imperial Highnesses will visit the Crimea until May 20th. Their arrival is timed to the 100th anniversary of the last visit of Emperor Nicholas II to the Crimea in 1916. Their visit will also include a series of meetings with representatives of the clergy and examine the historical and cultural attractions of the region.

Their Imperial Highnesses were met at Simferopol airport by a delegation of Crimean officials headed by Federation Council senator from the legislative (representative) public authority of the Republic of Crimea Sergey Tsekov, vice-speaker of the Crimean parliament Andrei Kozenko, head of the Committee of the State Council of the Republic of Crimea on State Building and Local Government Yefim Fiks, Metropolitan of Petrograd and Gdov in Simferopol Archpriest John Simon, among many others.

Welcoming the Head of the Russian Imperial House to the Crimean land, Tsekov said that this visit will be especially interesting for Maria Romanova and her son George. "Since your last visit to the Crimea, much has changed. The peninsula has transformed rapidly since the reunification with the Russian Federation in 2014."

During a meeting held upon their arrival at the airport, representatives of the republic's authorities updated the Grand Duchess and her son on the current situation in the Crimea, as well as prospects for development in the socio-economic, cultural, recreational and other areas.

Grand Duchess Maria Vladimirovna visited the Peninsula in September 2013 in the framework of the events dedicated to the 400th anniversary of the Romanov dynasty. It was during this visit that HIH hosted a gala reception at the Livadia Palace, attended by about 40 representatives of European Royal and aristocratic families.

On Monday, May 16 - the Grand Duchess will travel to Evpatoria, where a memorial plaque in memory of the visit made by Emperor Nicholas II in 1916.

Grand Duchess Maria Vladimirovna will also attend the unveiling of a monument to Nicholas II and visit a mosque in Evpatoria, and in the evening in Simferopol will meet with the mufti of Muslims of Crimea Haji Emirali Ablayev.

On Tuesday, May 17th - Grand Duchess Maria will journey to Sevastopol, visiting the Bratskoe cemetery memorial, St. Nicholas Church, St. Volodymyr’s Cathedral, and will also meet with the leadership of the city and commander of the Russian Black Sea fleet, followed by a walk along the embankment of Balaklava.

On Wednesday, May 18th - the Grand Duchess, together with officials of the Crimea will take part in the events dedicated to the day of memory of victims of deportation of the Crimean Tatars. On the same day will be her meeting with the Plenipotentiary representative of the President of Russia in the Crimean Federal district Oleg Belaventsev.

On Thursday, May 19th - the Grand Duchess will meet with the Head of Crimean Parliament Vladimir Konstantinov, as well as visit the winery at Massandra, and will open the exhibition "History of Russian Perfumery and Cosmetics" in the Vorontsov Palace in Alupka. Russian Orthodox Church Discuss Return of Romanov Remains from China
Paul Gilbert
On 18 July, 1918 Grand Duke Sergei Mikhailovich, three sons of Grand Duke Konstantin Konstantinovich, and the son of Grand Duke Paul Alexandrovich, Prince Vladimir Paley were thrown alive into a mine near Alapaevsk. Their remains were then taken via the Siberian city of Chita to China by the retreating troops of the White Army, and buried in Peking in the 1920s. Stolen Diaries of Emperor Alexander III Recovered by Russian Police
Paul Gilbert
The 1864 diary contains daily handwritten entries by the future Russian emperor. On the last page, he wrote: "A Good Year." The other two volumes - dated 1888 and 1892 are calendars or day timers, with handwritten notes made by the emperor on each page.
Comments
×