On Not Escaping the World, But Being Holy in It

Homily for the Sunday After the Ascension in the Orthodox Church 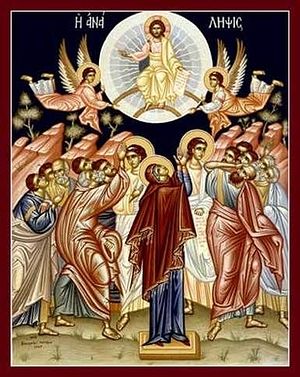 It is so easy to diminish ourselves by serving the false gods of pleasure, power, and pride. It is so tempting to allow our pursuit of these passions to obscure the holy calling that we have as those created in the image and likeness of God. Our Lord’s Ascension into heaven, forty days after His resurrection, makes clear that we find true fulfillment as human beings by participating in His blessed, eternal life. Anything else falls well short.

Jesus Christ has fulfilled our ancient calling to grow in the likeness of God, for in Him humanity and divinity are united in one Person. In His Ascension, He goes up into heaven as the God-Man, sharing in the glory that He had with the Father and the Holy Spirit from eternity. Rising with His body and bearing the wounds of His crucifixion, He brings us with Him into the divine glory. Here is a brilliant icon of our salvation that makes clear that our Lord has raised us, not only from the grave and Hades, but into the eternal life of the Holy Trinity. Here is a clear sign of the completion of our vocation to become partakers of the divine nature by grace.

Today we commemorate the Holy Fathers of the First Ecumenical Council of Nicaea, who proclaimed that the One Who brings human beings into the eternal life of God is Himself truly divine and eternal: the only begotten Son of the Father. They recognized that even the best angel, prophet, or teacher could not do that, for only One Who is divine and eternal can bring us into the divine, eternal life of the Holy Trinity. That is a key reason why the Council of Nicaea rejected the teaching of the heretic Arius, who did not think that the Son was fully or eternally God. That is why the Orthodox Church has always disagreed with those who seek to reduce Christ to a great religious teacher or moral example, or who view the Kingdom of God as a mere extension of an earthly kingdom of whatever kind. Our salvation comes not merely through instruction or social change, but through the New Adam Who conquers death and ascends to heavenly glory as the God-Man.

Even if we know the words of the Nicene Creed by heart, we may still be tempted to turn Christ into a Savior who fits with our preconceived notions about what we would like from a religion. After all, it is much easier to follow a Lord Who serves our own pursuit of pleasure, power, and pride than it is to embrace One Who calls us to holiness in every dimension of our existence. Even as He is fully divine, He is also fully human. He went up into heaven with a glorified human body. To share in His life is to share in His holiness in ways that make us shine with the divine glory in body, soul, and spirit in the world as we know it. That does not mean becoming less human, but becoming more truly ourselves in God’s image and likeness.

Some think that salvation will come to the world through changes of this or that kind in politics, culture, or economics. Others focus their hopes on changing how people think, feel, or otherwise adjust themselves in relation to various challenges in life. Some ways of addressing such matters are clearly better than others, but none of them fulfills our vocation to be in God’s image and likeness. None of them conquers death and makes us participants in the eternal life of our Lord. None of them can ascend to heaven.

Contrary to some popular notions, ascending with Christ to heavenly glory is not about escaping or abandoning the world, its people, or its problems. The Lord said to His Father concerning His disciples: ”I do not pray that You should take them out of the world, but that You should keep them from the evil one.” (John 17: 15) He prayed for their holiness: “Sanctify them by Your truth.” (John 17: 17) Christ’s prayer shows that we find the fulfillment of our humanity when we unite ourselves with Him through a holy life, when we become radiant with the divine brilliance in how we live in this world in tangible, practical ways.

St. Paul is a good example of what such a life looks like. He obviously did not place his own personal tranquility above the needs of others or the ministry of God’s Kingdom. He was beaten, imprisoned, shipwrecked, and ultimately killed for his faith in Christ. He dealt with difficult challenges of all kinds in the churches that he founded and oversaw. In today’s reading from Acts, he warned the elders “that after my departure fierce wolves will come in among you, not sparing the flock; and from among your own selves will arise men speaking perverse things, to draw away the disciples after them. Therefore be alert, remembering that for three years I did not cease night or day to admonish everyone with tears.” That is certainly not the way of life of someone who thought that religion was a way to escape from problems and difficulties.

St. Paul also said that he “coveted no one’s silver or gold or apparel. You yourselves know that these hands ministered to my necessities, and to those who were with me. In all things I have shown you that by so toiling one must help the weak, remembering the words of the Lord Jesus, how He said, ‘It is more blessed to give than to receive.’” This apostle manifested his union with Christ by living in a Christ-like way, taking up his cross and serving others, regardless of the cost. That is how he was sanctified in God’s truth and came to know the holy joy of true participation in the divine life to the depths of his soul.

St. Paul’s background as a fierce persecutor of Christians before his conversion did not keep him from ascending to holiness in Christ Jesus. Neither was he held back in this regard bythe multitude of grave and even life-threatening challenges that he faced throughout his ministry.After the Lord told him, “My grace is sufficient for you: for my strength is made perfect in weakness,” St. Paul wrote “I take pleasure in weaknesses, in reproaches, in necessities, in persecutions, in distresses for Christ’s sake: for when I am weak, then am I strong.” (2 Cor. 12: 9-10)

Like the apostle, we will ascend with Christ in holiness as we offer our weaknesses, failings, and challenges to Him, struggling as best we can to be faithful as we call on His infinite mercy. Unlike some commercialized forms of spirituality, genuine Christianity is not about making us happy on our own terms or somehow convincing ourselves that all is well when it is not. Instead, it is about being sanctified, becoming holy, by uniting every dimension of our life to Christ, including those which we find so hard to offer to Him for healing.

When doing so reveals our weakness, we will be in the position to receive the strength of the One of Who created us in His image and likeness, and Who has united humanity and divinity in His own Person. To ascend in holiness in Him is the fulfillment of what it means to be a human being. It not to escape the world, but to enter into the holy glory for which He made us by turning away from evil and corruption. An angel, a prophet, a political leader, or any mere creature could not do that for us sinners. No, that is something only God can do, and something that we can participate in only if we, like St. Paul, offer ourselves to the Lord in humble obedience amidst the pains and challenges of life in the world as we know it, including our own personal brokenness. That is how we may ascend in Christ to heavenly glory, not by escaping the world, but by opening our weakness to His strength. From the Ascension upon the Cross to the Ascension to Heaven
Fr. Touma Bitar
The resurrection would have had no value, had there been no ascension. Even Pentecost was only given to us so that we might be able to participate, actually and personally, in the act of the ascension, which was accomplished by the Lord Jesus in His body. Therefore, today we find ourselves in the midst of heavenly joy. Man is seated, in the person of the Lord Jesus, in heaven, at the right hand of God the Father. This is true joy and there is no greater joy than this joy. The Ascension and the Glorification of Man

The Ascension and the Glorification of Man
Fr. Lawrence Farley
It is especially important to remember this at the Feast of the Ascension, for the Ascension is not only the triumph of God, but even more the triumph of Man. We do not glorify God by belittling man and denying humanity its proper glory. Humanism, with its emphasis on the splendour of the human person, at least gets that right.
Comments
×