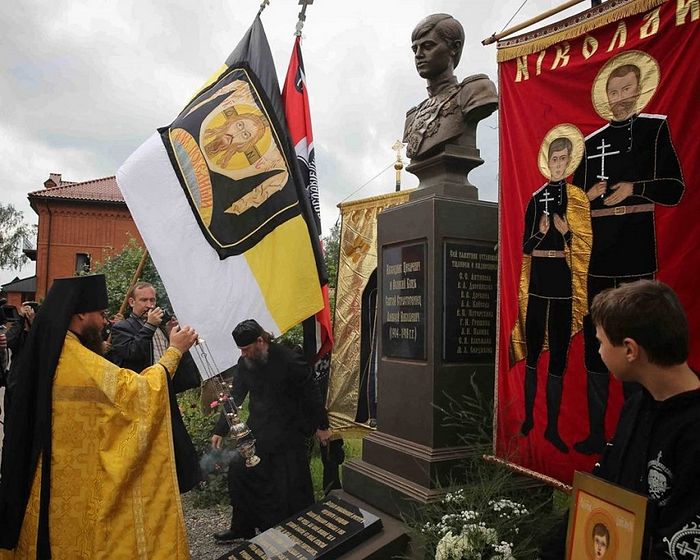 A new monument to Tsesarevich Alexei Nikolaevich (1904-1918) has been unveiled at the Saint Nicholas Berlyukovsky Monastery, situated on the outskirts of Avdotyino, a village on the Vorya River, 42 kilometres northeast of Moscow.

At the base of the monument is a large granite memorial plaque engraved with the words of Archpriest of the military and naval clergy of the Russian Empire Georgii Ivanovich Shavelshkii, who personally knew the Tsesarevich.

The monument is situated on the "Romanov Walk of Fame" - a path within the grounds of the historic monastery that also contains similar monuments to members of the Russian Imperial family who contributed to the history of Russia and Saint Nicholas Berlyukovsky Monastery: Emperor Paul I (2015), Emperor Nicholas I (2015), Grand Duke Mikhail Nikolayevich (2011), Emperors Alexander I and Alexander III (2012), Emperor Alexander II (2013) and Nicholas II (2014). There are plans to inaugurate similar memorials to Grand Duke Sergei Alexandrovich and his wife, Grand Duchess Elizabeth Feodorovna.

This project is aimed primarily at the patriotic education of our compatriots, the popularization of the great history of Russia, its heroes, generals, priests and rulers, who gave all their strength for the prosperity of the country. A Greek artist’s ‘Imperial Russia’ in metal and glass