18th-19th century Belarusian icons, bells to go on display in Warsaw on October 2 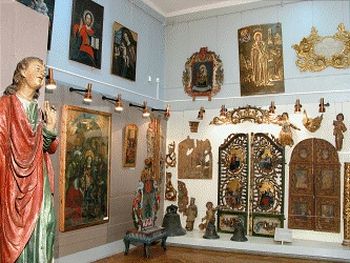 Photo: http://nasb.gov.by/images/sculpture.gif
An exhibition of 18th-19th century Belarusian icons and church bells will open in Warsaw on October 2, BelTA learned from Boris Lazuko, the head of the ancient Belarusian culture department of the Center for Belarusian Culture, Language and Literature at the National Academy of Sciences of Belarus (NASB).

“The exhibition ‘Gates of Faith. 18th-19th Century Belarusian Icons and Bells from the Holdings of the NASB Museum of Ancient Belarusian Culture' will open at the Saints Cyril and Methodius Orthodox Cultural Center in Warsaw on October 2. Plans have been made to display the Belarusian artifacts at different churches, monasteries, convents and Orthodox centers in Poland throughout 2016 and 2017,” Boris Lazuko added. The exhibition in Warsaw has been organized with the support of the Belarusian Embassy in Poland.

Boris Lazuko noted that the NASB Museum of Ancient Belarusian Culture has one of the biggest collections of icons in the country reflecting the distinctive features of the Belarusian school of icon painting, and the traditions of Russian Orthodox and Catholic religious paintings.

The museum is a large research center. Its holdings feature some 30,000 museum artifacts and archive documents. The museum regularly organizes cultural events in Belarus and abroad, for instance, in France, the United Kingdom, and Russia.