Why has Aum Shinrikyo been banned in Russia only now?

Many thought that the Japanese cult Aum Shinrikyo, which enjoyed incredible popularity in the 1990s, was long dead. However, it turns out that for the past 20 years, the group responsible for the nerve gas attack in Tokyo in 1995 has been building up its influence again in Russia. 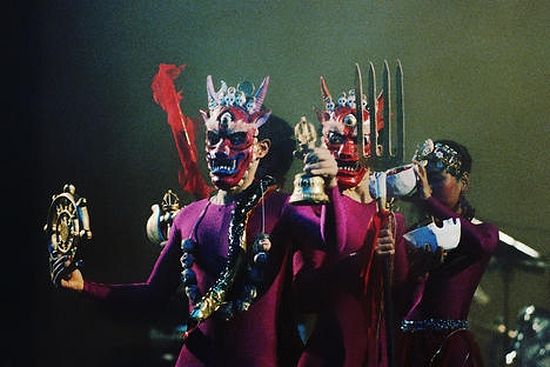 Not long before the breakup of the Soviet Union, the previously atheistic country was gripped by the occult. Photo: Leaders of the destructive Japanese cult Aum Shinrikyo perform in Moscow, Russia, on March 18, 1992. Source: Vadim Zhukov, Sergei Miklyayev/TASS

In late September, the Russian Supreme Court issued a ruling banning the destructive Japanese cult Aum Shinrikyo and recognizing it as a terrorist organization. This was something of a surprise – why had this happened only now, 20 years after members of the sect carried out a sarin attack on the Tokyo subway in 1995, killing 12 and poisoning nearly 6,000?

All these years, the public in Russia were convinced that the deadly religious cult had been outlawed, at least in Russia, and was a thing of the past. In early April 2016, the official spokesman of Russia’s powerful Investigative Committee, Vladimir Markin, said that Aum Shinrikyo was on the list of terrorist organizations.

However, it later turned out that the organization was not on any of the blacklists. Furthermore, the number of Russian followers of the half-blind Japanese guru Shoko Asahara is once again nearing the peak of the early 1990s, when the Russian division of the sect was nearly more numerous than that in Japan. In fact, Russia had so many connections with Aum Shinrikyo that rooting it out was no easy thing.

“I listened to their free-of-charge lectures and liked them very much. After the lectures, they invited me to get down to practice,” recalls an anonymous user in the Stop Sect public group on Russia’s most popular social network, VKontakte.

The group has some 700 members, mostly those who at one point came across Aum Shinrikyo but managed to escape its clutches. Donations, lectures, video materials – everything had to be paid for.

“I was unlucky in that I was from Moscow and they charged Muscovites more. After that I had to reread books written by their guru Shoko Asahara 10 times,” the anonymous user continues.

In another story, a 23-year-old man from a western region of Russia describes in private correspondence made available to RBTH “the joys” offered by the organization.

“I could not shed the feeling that it was a sect, up till the end of the transformation program, but all I was given to understand was… It works so f*****g well… They say that a sect is a scary place, where you are zombified. YES, they use NLP and other practices and I saw them use those, but just think: What about TV, what about school, what about university and other state structures that brainwash you?” he says.

People often come in contact with Aum Shinrikyo through an interest in yoga: It is among yoga practitioners that new converts are usually recruited. People are drawn into the sect via Skype or social networks. Most of Asahara’s emissaries are locals rather than sect members from Japan. At first, the guru’s name is not mentioned at all, it appears only after a couple of months of daily brainwashing.

The sect operates from the shadows though a network of undercover cells. But that was not always the case. Aum Shinrikyo first arrived in Russia together with perestroika in the late 1980s. It had a daily program on the radio, was shown on TV, gathered mass meditations at the country’s biggest stadium, and preached at the Kremlin Palace of Congresses.

Not long before the breakup of the Soviet Union, the country was gripped by the occult. The pendulum had swung and the previously atheistic state plunged into religious ecstasy.

“In the early 1990s, people had not yet developed an immunity to sects. It is therefore not surprising that Aum Shinrikyo attracted so many followers: That sect had an unprecedented promotional campaign, the opulent building of the Russian-Japanese University in central Moscow and the support of the secretary of the Russian Security Council, Oleg Lobov,” said Alexander Dvorkin, president of the Russian Association of Centers for Religious and Sect Studies.

The new liberal government of the 1990s must have thought that flirting with foreign fads was not a bad PR move. “They saw it as ‘something exotic from Japan’ that people liked. Though I would not rule out an element of corruption either,” said Dvorkin.

During his visit to Moscow in 1992, Shoko Asahara had a meeting with Russian Vice-President Alexander Rutskoi, while his handshake photo with the then mayor of Moscow, Yury Luzhkov, at the opening of a branch of the sect still remains a blot on the latter’s reputation. There are no exact figures for the number of Aum Shinrikyo followers in Russia at the time, with estimates ranging from 35,000 to 50,000 people.

By 1995, Aum Shinrikyo already had seven spacious offices in Moscow. By offering a mixture of Buddhism, Hinduism, Christianity, occultism and a doomsday cult, the teaching was fast recruiting new followers. They were sold locks of hair from guru Asahara’s head, his bathwater, vials with blood and sperm – at $8,000 each. At some point, Asahara proclaimed himself to be Christ reincarnate, which only brought him even more followers.

The friendship with Russia was so close that emissaries of the sect had shooting training organized for them at a firing range outside Moscow and a crash course in how to drive a tank.

“It may well be that the drawings for making assault rifles [that were seized after the Tokyo terrorist attack – RBTH] and a formula for making sarin had originated from Russia,” reported state-run news agency RIA Novosti. That theory is possibly confirmed by notes found in the sect’s Moscow offices about sarin tests conducted on its members.

After the sarin attack on the Tokyo underground in March 1995, the sect was taken to court by the parents of its young monks. While the court liquidated the cult, it was not entered on the register of banned organizations. It just changed its ways of recruiting new members and lay low for a while.

Aum Shinrikyo then kept quiet for more than 10 years, so it is not surprising then that after a while it was simply forgotten and thought to be inactive. In 2000, a group of Aum Shinrikyo members headed by Dmitry Sigachev were arrested in the Primorsky Territory in Russia’s Far East: They had been preparing a terrorist attack in Japan and wanted to free Asahara, who had been sentenced to death. By 2006, according to official statistics, there were about 300 Aum Shinrikyo members in Russia.

Seminars and congresses began to be held outside the country, primarily in Ukraine, in places popular with Russians, like the resorts in Crimea. However, in 2013, Ukraine refused entry to Japanese instructors and shut down organizations affiliated with Aum Shinrikyo. After that followers of the cult started gathering in Turkey, another holiday destination popular with Russians.

It would appear that a turning point came when flights between Russia and Turkey were temporarily suspended, because in the spring of 2016, yet another congress of Aum Shinrikyo members in a hotel in Montenegro shut down for the winter was busted by local police, while its delegates with out-of-date visas were deported from the country.

A couple of weeks later, large-scale searches were conducted in Moscow and St. Petersburg, during which databases of sect members were seized. According to (in Russian) the Prosecutor-General’s Office, the Japanese cult may have up to 30,000 followers on Russian soil at present.

“It by no means will cease to exist [following the court ruling] but now membership in it will be a criminal offense, people will become far more cautious and the sect will have less room for maneuver. This too is a good outcome,” said Dvorkin of the Russian Association of Centers for Religious and Sect Studies. Aum Shinrikyo Japanese sect outlawed in Russia
The Supreme Court of Russia has banned the activity of the Aum Shinrikyo international religious organization on the territory of the country. Film on victims of sects shown in Moscow

Film on victims of sects shown in Moscow
Valeria Mikhailova
The actor noted that the film’s primary aim is to tell people that they are not alone: “The movie gives you the understanding that there will always be people who will support you; you need only to find them… Please, do not think that your problem is unsolvable."

The Story of a former High-Ranking Moonie
Archpriest Lev Semyonov

The Story of a former High-Ranking Moonie (includes Video)
The guest of today’s program is Archpriest Lev Semyonov. After taking interest in their interpretation of the Bible, he joined the Unification Church … How did he, a Unificationist preacher and one of the leaders of the Russian division of this sect manage to separate the truth from lies? Is it difficult to quit a sect and why? What should you do if your close friend has joined a sect? Tertullian and the Dangers of the Sectarian Mind-Set
Dr. David Ford

Tertullian and the Dangers of the Sectarian Mind-Set
Dr. David Ford
In our own times, with the Church's increased communications with other Christian confessions, including the recent meeting between Patriarch Kirill of Moscow and Pope Francis, and also considering the upcoming Pan-Orthodox Council which will speak to the Orthodox Church's stance in relation to other confessions, the temptation to adopt a sectarian mind-set is as strong as ever. To be sure, defense of Orthodoxy is necessary and blessed, but always with humility and love.
Comments
×