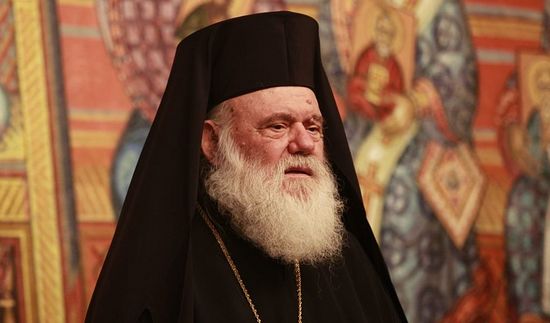 “The Church was, is and will always be the mother of our people, with whatever that entails,” said Archbishop Ieronymos II of Athens and all Greece, continuing the confrontation with Education Minister Nikos Filis and his decision to change religious courses in schools.

“The State, if it so wishes, and has the consent of the people, can try to separate itself from the Church, observing strictly the obligations it has undertaken towards the Church and all relevant contracts,” the statement continues.

That was the key reference in Tuesday’s speech by Ieronymos during the Holy Synod of Bishops of the Church of Greece. It was in response to Filis’ negative allegations about the role of the Church during the German Occupation and the dictatorship.

The reference to the “consent of the people” is not an indirect proposal for recourse to a referendum, said a Church of Greece spokesman to Kathimerini newspaper. “The State does not want, nor indeed can be separated from the Church in terms of society,” he added.

During his speech, Ieronymos alleged that the leftist government has a specific agenda to alter the Christian faith and to convert religious lessons in schools to an interfaith jumble.

“The parties of the Left with their known communist worldview — as experienced before the collapse of socialism in the eastern bloc, when in essence religious faith was persecuted — are driven by failed atheistic ideologies and meet with the neoliberal parties under the directives of the new era and the new order. The talk of Church-State separation is supposedly a progressive slogan. These perceptions, however, belong to the previous century, born under a bigoted, anti-religious and anti-church populist spirit that is incompatible with today’s beliefs about the state and religion,” the Archbishop said.

Ieronymos also said that there is a lot of needless talk and procrastination on two issues that need to be resolved immediately, namely religious courses in schools and proper utilization of Church assets. He said that should be done in cooperation with the state so that the Church continues its social welfare work.

Greek Church comes out against cancellation of morning prayers in school
Orthodoxy is the state religion in Greece; ninety-eight percent of its citizens belong to the Greek Orthodox Church. At the same time, the constitution guarantees freedom of religion for all citizens.
Comments
×