Russian Orthodox Spiritual and Cultural Center opens up in Paris 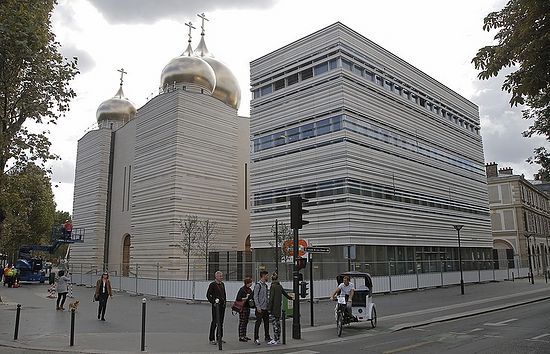 The Russian Orthodox Spiritual and Cultural center in Paris held its inaugural opening on Wednesday.

The center, which was under construction since 2014, was built on the Branly embankment, in the historic center of the French capital.

The opening was attended by Mayor of Paris Anne Hidalgo, as well as Russia’s Minister of Culture Vladimir Medinsky and representatives of the Moscow Patriarchate.

"The construction of this unique facility is an evident testimony to the strength of cultural and humanitarian relations between France and Russia, evidence of the mutual intention of our countries to continue a constructive dialogue," said Russian President Vladimir Putin in a statement read by Medinsky. "The process of receiving permission for the project was not easy, but the continued support of the French government helped the completion of all of the work on schedule."

Medinsky said that "the center will open its doors to anyone who is interested in the history of our country, our scientific and cultural accomplishments, for those who want to learn Russian. And the Holy Trinity Cathedral will without a doubt play an important role for the [Russian] Orthodox people in Paris."

The complex consists of a French-Russian elementary school, a bookstore, a cultural center, exhibition facilities, a coffee shop, and the highlight - the Holy Trinity Cathedral. A special event in Paris: Street named after an Orthodox Saint

A special event in Paris: Street named after an Orthodox Saint
On 12 November 2013, at the proposal of the Paris mayor Anne Hildago, the Paris city council voted unanimously in favour of naming a new street in the 15th district after Mother Maria Skobtsova. Orthodox Center in Paris: symbol of faith linking Russia and France
The сenter will incorporate a French-Russian primary school for 150 school students, a library, exhibition halls, premises of an Orthodox parish and a seminary Construction of first Orthodox Church in Strasbourg begins
On December 7, 2013, on Saturday, feast-day of Holy Great-Martyr Catherine, on the parcel of land assigned by the city of Strasbourg for the Russian Orthodox Church on the Boussingault Street on the bank of the canal de la Marne in the quarter 15, a prayer service for the beginning of the construction work was performed.
Comments

Sergey12/18/2016 12:09 pm
I do not understand why the center is closed week-ends. During week-ends in Paris there are a lot of ourists from many countries who are eager to see it. And we, like idiots, closing it for week-ends instead of opening the doors wide open and to enlighten people on our traditions, beliefs and the orthodoxy... I do not know who is defining the policy of the center but it is the stupidest thing i ever seen.

Learn to publicize yourselves! In the modern world it is absolutely necessary! Take an example of the French. They are genius in that!

Are you so tired to be opened in week-ends? Really stupid!