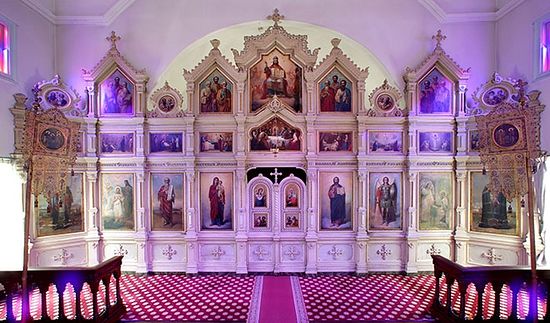 An Orthodox cathedral famed for its century-old Russian icons will open its doors to the public for the first time as part of a series of special openings of usually exclusive heritage sites.

The exhibition offers a rare opportunity for non-followers of the church to catch a glimpse of a priceless Russian iconostasis--a dividing wall made up of icon paintings--seldom seen even in its homeland.

“In Russia, similar churches were destroyed during the Soviet persecution of Christianity,” said head priest Shin Oikawa. “This wall is a culturally important piece of heritage, too.”

The Holy Annunciation Cathedral here in the ancient capital of Japan is a wooden building built in the Russian Byzantine style. Its exterior is painted white and its copper roofing is covered with patina.

The church is located in the city’s Nakagyo Ward, surrounded by many historic temples, shrines and royal palaces.

It was designed by Japanese architect Shigemitsu Matsumuro, a master of European-style architecture. Both the building and its interior decoration were completed in 1903, and the iconostasis was imported from Russia for the cathedral.

The attention-grabbing iconostasis that divides the nave and sanctuary behind the wall is made of 30 panels of icon paintings placed in decorative wooden frames and designed to look like a facade of a church with pinnacles. Not many examples of such walls remain in Russia.

Other sacred instruments such as spoons, knives, plates and crucifixes for ritual use were brought to the cathedral from Russia. Icons donated by Russian prisoners of war during the Russo-Japan War are also displayed on the walls.

However, time has been unkind to the priceless artwork, waiting for proper conservation and repair work. The century-old paint is flaking off in places, and some artworks have severe markings on them as if they have been badly scratched.

Oikawa explained that they were damaged during World War II. The church decided to take refuge in the countryside, and some of the paintings were taken down and packed to be taken to safety. The war ended before they actually were transferred, but by that time, the precious paintings had been irreversibly damaged.

The church building itself is also in a precarious condition. The architecture has small eaves, unlike traditional Japanese shrines or temples, making it prone to damage from Japan’s rainy climate. Water has seeped in through the walls and slowly rotted the wooden structure inside.

Major conservation projects were done in 1987 and 1999, but concern for the state of this aging building persists.

The cathedral will be open for public viewing from Oct. 28 through Nov. 7. Horrific Christian persecution in Japan detailed in new book by Jonathan Clements
Some of the gruesome acts done to the Christians included attaching straw coats to them and setting them on fire. Clements also tells the story of a pregnant woman who was kept in a cage while being submerged. The death of the mother and her baby may have been the incident that sparked the Shimabara Rebellion. Catholic Christian peasants rose up against the shogun's forces in 1637 to 1638. Church to commemorate perished Russian sailors to be build in Japan

St. Nicholas of Japan on Buddhism, continued
Priest George Maximov
Excerpts from his diary supplement our understanding of how St. Nicholas related to Buddhism. Here observations are also marked by the fact that they were made by a practicing missionary.
Comments
×