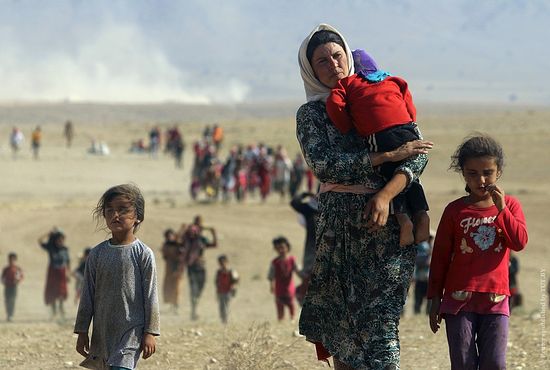 Millions of Christians emigrated from the Middle Eastern countries over the past 100 years.

"The number of Christian emigrants comprised six million people in the past 100 years," Suheil Farah, Lebanese university professor and a member of the Imperial Orthodox Palestine Society (IOPS), was quoted by the IOPS press service as saying.

The professor also gave statistics for Turkey, where the number of Christians reached some 2 million in 1920, while today there are no more than 55,000 left.

The scientist said 10,000-12,000 Christians live in Jerusalem (2% of the city's population), but their number there is decreasing continually, "which may result in their disappearance from the demographic and geographical map of the Holy Land in the next 50 years." Patriarch Kirill: Persecution of Middle East Christians surpasses scope of Soviet Russian persecution
“That which the Christian world is now facing, it has never faced before. By the number of Christians killed, the persecution in Russia was more brutal and more extensive, but if we look at the proportions not in absolute, but relative terms, then the events in the Middle East can be called a genocide of the Christian population.” Middle East Christians Flee: Populations In Syria, Egypt, Palestine And Iraq Dwindle Amid Strife
Christian populations across much of the conflict-stricken Middle East have rapidly declined in recent decades, and now many church leaders fear their ancient presence in the region could soon disappear. Metropolitan Hilarion of Volokolamsk: “There is genocide of Christians with tacit consent of western powers”
The Russian Federation is the only large state in the world to make defense of Christians a vector of strategy of its foreign policy,
Comments
×