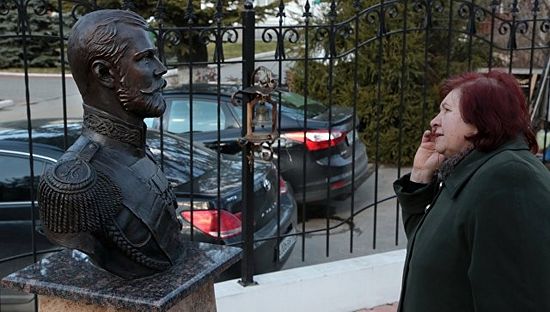 As reported yesterday, eyewitnesses have claimed to see myrrh streaming from several icons and a bust of Tsar Nicholas II at the Holy Royal Martyrs chapel in Simferopol. Representatives of the Simferopol and Crimean Diocese have investigated the icons in the chapel and the bust standing outside, but found no traces of the miraculous occurrence. However, as RIA-Novosti reports, they have called on the local priest to continue monitoring the situation.

Earlier Deputy of the State Duma of Russia and former Prosecutor General of the Republic of Crimea Natalia Poklonskaya spoke about the myrrh-streaming bust of the Holy Royal Martyr Nicholas II in Simferopol. Her words have evoked a mixed reaction in social networks.

Miraculous myrrh streaming is typically associated with icons and the relics of saints in Orthodoxy, manifesting the grace of God present in the sacred objects, and is often used for healing.

“A study of the situation connected with the statement of the State Duma Deputy about the possibility of the myrrh-streaming bust of the Tsar-Passion Bearer Nicholas II, situated near the chapel of the Holy Royal Passion Bearers… and also of several icons inside the chapel itself, was carried out on site by a commission… At the time of the visit to the chapel… traches of myrrh on the bronze bust of the Tsar-Passion Bearer Nicholas and on the icons in the chapel were not found,” reads a message of the diocesan press service.

However, to come to a final conclusion, the commission has tasked the local priest with continuing to observe the icons and bust, and to report any signs of myrrh to the bishop and commission immediately.