Israel banned Met. Seraphim of Piraeus from entering on Holy Saturday for words against Zionism 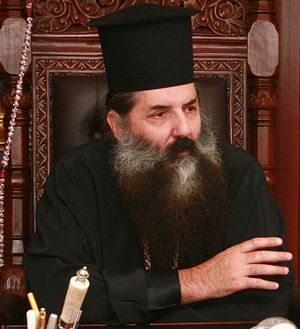 Photo: Pravmir.com
Metropolitan Seraphim or Piraeus has spoken out against Israel’s decision to ban him from entering Jerusalem on Holy Saturday on the basis of supposed anti-Semitic remarks, reports AgionOros.

At the February 7 meeting of the Holy Synod of the Greek Orthodox Church, Met. Seraphim was appointed head of the delegation representing the Greek Church at the descent of the Holy Fire in Jerusalem on Holy Saturday. He received a diplomatic passport from the Greek Ministry of Foreign Affairs specifically for the trip.

The Greek bishop has responded that he never made any ant-Semitic remarks, adding that he was intending to visit Jerusalem, a city of international status. He accused Israel of violating his religious rights and of “anti-canonical interference in the affairs of Greece and the Greek Church.”

Commenting further on the accusation of anti-Semitism, Met. Seraphim wrote, “Orthodox people are not racists and not atheists. We feel sympathy for the Jews as for all other people. The Jewish people gave us the Old Testament righteous ones and patriarchs, the apostles, the first Christians, the Theotokos, and the Lord… But as Orthodox, we are anti-Zionists. That is, we are against international Zionism, which has transformed the religion of the Old Testament into Satan worship… The Orthodox Church is against imperial Zionism, aspiring to global domination.”