Venerable Hilarion the New, Abbot of the Dalmatian Monastery 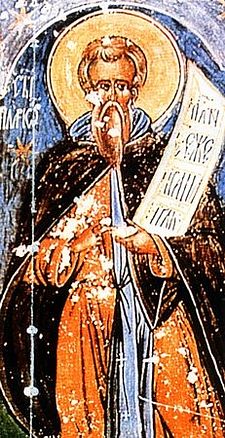 Saint Hilarion the New was born of pious parents, Peter and Theodosia, who raised him in the virtues and instructed him in Holy Scripture. At twelve years of age Saint Hilarion was tonsured as a monk at the Hesychius monastery near Constantinople, and from there he transferred to the Dalmatus monastery, where he received the Great Schema and became a disciple of Saint Gregory the Dekapolite (November 20).

The monk deeply venerated his God-bearing patron Saint Hilarion the Great (October 21), and he strove to imitate his life, so he came to be called Hilarion the New. At the Dalmatus monastery, he was ordained presbyter. After the death of the igumen the brethren wanted to elect Saint Hilarion to this position, but learning of this, he secretly fled to Constantinople.

Then the monks of Dalmatus monastery sent a petition to Patriarch Nicephorus, asking that Saint Hilarion be assigned as igumen. The Patriarch summoned the saint and persuaded him to give his assent. Saint Hilarion submitted out of holy obedience. For eight years he peacefully guided the monastery, but in the year 813 the iconoclast Leo the Armenian (813-820) occupied the imperial throne. The saint refused to dishonor the holy icons, and he boldly accused the emperor of heresy, for which he endured many torments. They locked him up in prison for awhile, and vexed him with hunger and thirst.

The impious Patriarch Theodotus, who replaced the exiled Patriarch Nicephorus, caused the monk much suffering in demanding that he abandon Orthodoxy. The monks of the Dalmatus monastery went to the emperor and asked him to release the saint, promising to submit to the imperial will. After they returned to the monastery, however, Saint Hilarion and the monks continued to venerate the holy icons. The enraged emperor again threw the monk into prison. He gave the saint over to torture with all the means at his disposal, hoping to change his mind.

The wrath of God soon overtook the wicked emperor. He was cut down by his own soldiers in church at the very spot where he had once thrown down a holy icon. The new emperor Michael II (820-829) freed Saint Hilarion from his imprisonment, and the saint settled into a monastic cell. Upon the death of Saint Theodore the Studite (November 11), who also suffered for the holy icons, Saint Hilarion beheld holy angels taking the soul of Saint Theodore to Heaven.

Under the iconoclast emperor Theophilus (829-842), Saint Hilarion was again put under guard and beaten terribly, then they confined him on the island of Aphousia.

After the death of Theophilus, the holy empress Saint Theodora (842-855) gave orders to recall the confessors from exile. Saint Hilarion returned to the Dalmatus monastery, again agreeing to be igumen. He departed peacefully in the year 845.

O God of our Fathers, / Always act with kindness towards us; / take not Your mercy from us, / but guide our lives in peace / through the prayers of the venerable Bessarion and Hilarion the New.

You imitated the powers on high, venerable Hilarion, / living by example the life of those who take flight. / Led by steadfast desire to the heavenly good things of Christ the King, / you put passing things from your mind and attained to Him. / Entreat Him without ceasing for the sake of us all!