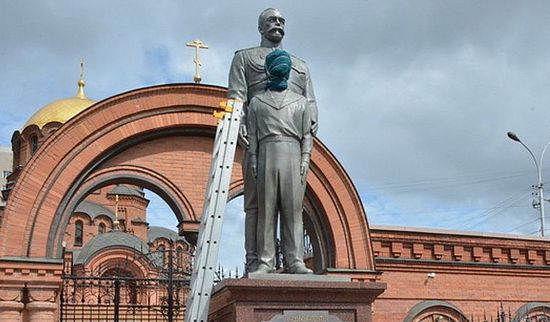 Novosibirsk police are looking into the damage inflicted on a monument to Tsar Nicholas II and his son Tsarevich Alexey, installed in July at St. Alexander Nevsky Cathedral, reports Interfax-Religion, with reference to the press service of the regional office of Russian Internal Affairs.

According to police, a 31-year-old Novosibirsk man placed a ladder against the newly-consecrated monument, and, having climbed up it, dealt several blows with an axe. Security officers happened to pass by at the time and were able to detain the vandal and hand him over to the police. Motive and cost of damages are yet to be established.

The head of the tsarevich in the monument, which was apparently the target, is currently covered over by a cloth. The statue of the emperor himself was not damaged.

The monument had only just been opened on the square in front of St. Alexander Nevsky Cathedral in Novosibirsk on July 16, the day before the Church commemorates the holy Royal Martyrs. It was consecrated by Metropolitan Tikhon of Novosibirsk and Berdsk. The consecration was also attended by Bishop Paul of Kolyvansky, the dean of Novosibirsk churches Archpriest Alexander Novopashin, and the clergy of the Novosibirsk Diocese.

Fr. Alexander also noted that Novosibirsk was previously known as Novo-Nikolaevsk, in honor of St. Nicholas the Wonderworker, the patron saint of Tsar Nicholas II.