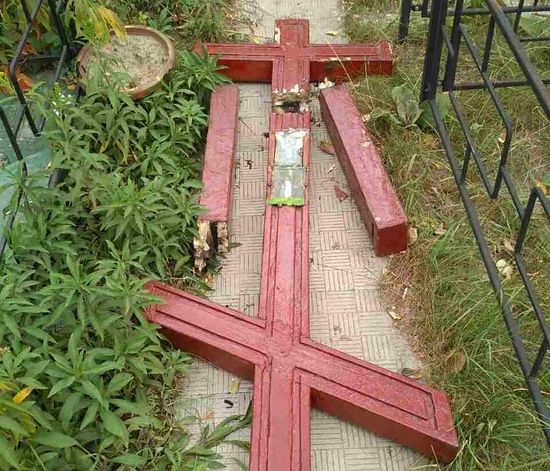 On the night of October 6, presumably between 1:00 and 2:00 AM, the grave of the holy Hieromartyr Alexander (Petrovsky) was vandalized in the Kharkov city cemetery, reports the Kharkov Diocese.

The cross at St. Alexander’s grave was broken, and his gravestone was partially damaged. 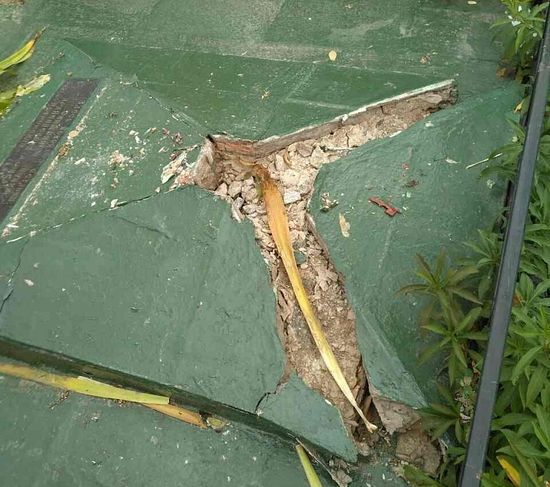 The holy relics of the confessor of the Orthodox faith were uncovered and transferred to the Holy Annunciation Cathedral in 1993. The saint’s grave is revered by Orthodox faithful and constantly adorned with fresh flowers, and his relics are lovingly venerated within the church. 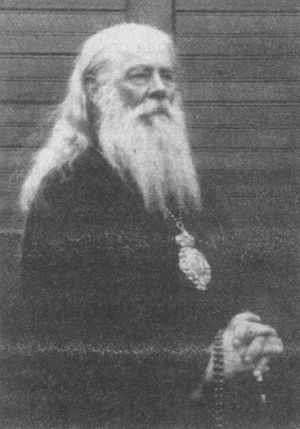 Photo: fatheralexander.org
St. Alexander (Petrovsky) was born on August 23, 1851 in the city of Lutsk, in the Volynhia Province. He was consecrated to the episcopacy in 1932, later being appointed to the Kharkov Diocese on May 20, 1937.

The faithful hierarch suffered under the godless Soviet regime, as did millions of other Orthodox Christians in those times.

Inevitably, the fate shared by all who zealously defended the True Church befell Vladika Aleksandr as well. He saw this inevitability coming, and continuously exhorted his faithful to remain strong, never despairing in the face of adversity: “Whatever might come, stay strong, stay faithful and steadfast.” To his closest friends, he confided that he was the last faithful bishop remaining in the south of Russia. On 20 June 1938, Archbishop Aleksandr was arrested by the UNKVD [one of the many acronyms used at various stages of the Soviet era by the internal state police assigned to persecute and destroy "enemies" of the totalitarian regime – Tr. Note], on charges of counter-revolutionary propaganda and agitation. On 17 July 1939, a military tribunal of the Kharkov Military District convicted him, sentencing him to 10 years of incarceration in the prison of Kholodnaya Gora. The day he was brought to that prison became a momentous event for its inmates. The tall, imposing, saintly presence of this venerable holy father created a great stir; he was met with reverence by all the prisoners. His stay, however, was destined to be brief: on 24 May 1940, aged 89, he left this life. How? God alone knows. Some of the prison staff said he was strangled. The documentary evidence is stark: the record indicates that in May of 1940, the Kharkov morgue received “from the NKVD facility for the terminally ill at Kachenevka, the corpse of an elderly male, with a numbered tag on the foot, and papers indicating the surname ‘Petrovsky,’ with instructions for interment.”

An individual working at the morgue, formerly a subdeacon of the Archbishop, together with a gatekeeper of his who subsequently became an ordained priest (archpriest Ioakim Orekhov), immediately recognized Archbishop Aleksandr. He had been shaved and shorn, but his majestic and imposing presence, even in death, instantly set him apart from the hundreds of other ordinary corpses in their pitiful nakedness. Then, suddenly, a counter-order arrived from the prison: immediately return the corpse of Petrovsky, that had been transferred to the morgue in error. Quickly, they transferred the numbered tag from the remains of their archbishop onto the extremity of another, unknown and unclaimed deceased male, and returned that body to the prison with the papers designating it as “Petrovsky” that had accompanied the body of the reposed hieromartyr. That night, a group of monastics, faithful friends and devout followers of the hieromartyr, vested his mortal remains in his archbishop’s robes, and held the solemn funeral rites exactly as ordained by the Church. The coffin left in procession for its final resting place very early in the morning, but the streets turned out to be filled with mourners; the white headkerchiefs adopted by the sisters of the Kozelshchansk women’s Monastery were particularly ubiquitous, brightly lit by the sun. Weeping, crossing themselves, the faithful knelt, greeting the carriage that bore their beloved Archbishop’s coffin in a final farewell. Seeing the crowds, the man at the reins drove the horses at full speed…

Read the full life of St. Alexander (Petrovsky) at fatheralexander.org. Vandals pour paint over monument to Prince Vladimir in Kiev Memorial crosses desecrated in the Nikolayev region of the Ukraine

Memorial crosses desecrated in the Nikolayev region of the Ukraine
The culprits also felled another memorial cross that stood on the highway near the Semenivka village of the Arbuzynka district, poured the flammable liquid on it and set it alight. Nearby they dropped leaflets calling “to free the country from spiritual slavery”.