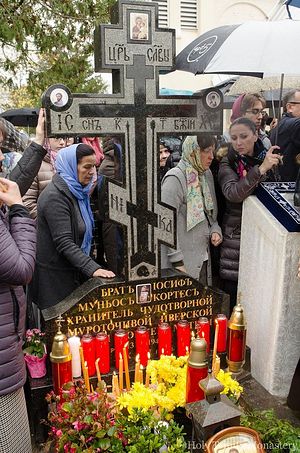 Preparations for the 19th annual pilgrimage to Holy Trinity Monastery in Jordanville, which pilgrimage Washington’s St. John the Baptist Cathedral organizes yearly, began long before the trip itself. Registration began immediately after the patronal feast day of the Beheading of St. John the Baptist, and within a matter of days all of the spots on two tourist buses were filled. Groceries had to be bought and meals prepared for our stay at the "Diasporan Lavra," both for the multitude of pilgrims and for the brethren of Holy Trinity Monastery. This practice was introduced at the very start of our pilgrimages, and aims to avoid distracting the monastery brethren from their prayerful work. At the time, this was a request of the ever-memorable abbot of the monastery and First Hierarch of ROCOR – Metropolitan Laurus.

One week before the pilgrimage, Archpriest Victor Potapov (rector of St. John the Baptist Cathedral) joined by his Matushka Maria, head sister of the cathedral’s Holy Virgin Protection Sisterhood Marina I. Zacharin, and parishioner Natalia V. Shevchenko, departed for the monastery, in order to prepare for display an exhibit of holy items and various personal effects of Brother Jose, which are safekept at Fr. Victor’s home. The organizers rushed to set up the exhibit, in order that it might be ready for the beginning of the autumnal Pastoral Conference for clergy of the Eastern American Diocese, which was held October 23-26. Among the principle display items was an "Optina" copy of the Montreal-Iveron Icon of the Mother of God. More on this icon below.

On the eve of the annual pilgrimage to Holy Trinity Monastery, on Friday, October 27, pilgrims who live far away from Washington arrived in the American capital in order to spend the night in the parish house, go to Confession, and assist with the preparations. Joining our local pilgrimage group were Orthodox Christians from the West Coast, other U.S. states, and even France and Canada. The following day, Saturday, October 28, 100 people gathered at the church at 6 o’clock in the morning. A huge quantity of supplies, along with personal items, was loaded onto the buses, which soon departed. The parish caravan followed after them, along with several private cars filled with pilgrims.

The journey from the capital to Jordanville is a long one (seven hours), but thanks to prayers, brotherly interaction, and spiritual talks dedicated to the history of the monastery and martyric struggle of Brother Jose, the time flew by unnoticed. 20th anniversary of Br. José Muñoz-Cortes commemorated in NY
The 20th anniversary of the repose of the keeper of the miraculous Montreal Iveron Icon of the Mother of God Icon Br. Jos&#233; Mu&#241;oz-Cortes was celebrated by the Russian Orthodox Church Outside of Russia (ROCOR) on Saturday. Jordanville: "And the Light Shineth in Darkness, and the Darkness comprehended it not" – Multitude of Pilgrims gathers to honor Memory of Brother Jose
On Saturday the 29th and Sunday the 30th of October, several groups of pilgrims and individual faithful of the Russian Diaspora gathered at Holy Trinity Monastery in Jordanville, NY, to honor the memory of the guardian of the Montreal Iveron Icon of the Mother of God – Brother Jose Mu&#241;oz-Cortes, murdered 19 years ago.
Comments
×