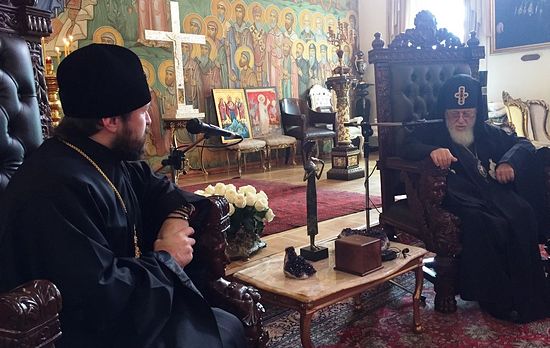 His Holiness Catholicos-Patriarch Ilia II of Georgia has accepted the invitation of His Holiness Patriarch Kirill to visit Moscow on December 4 for the celebration of the centenary of the restoration of the Russian Patriarchate, saying he is ready to visit, health allowing, reports RIA-Novosti.

Pat. Ilia has had several health problems lately. In January he was recovering from a flu brought on by a gall bladder inflammation, and in February he traveled to Germany for treatment when laboratory examinations revealed a fever following a bout with kidney stones. While in Germany he ended up having gallbladder surgery.

The special invitation was extended by the chairman of the Russian Church’s Department for External Church Relations His Eminence Metropolitan Hilarion (Alfeyev), who is currently on a working visit to Georgia, on behalf of Pat. Kirill.

“I want to welcome you on behalf of the Russian patriarch Kirill. He said he is waiting for you in Russia, with great love in honor of the celebration of the centenary of the restoration of the dignity of the Russian Patriarchate. We hope to see you and the members of your delegation at this event. We have invited the heads of various Orthodox Churches, receiving agreement from the majority of them,” the metropolitan said.

“I accept your invitation. If health permits, I will surely take part in this event,” the Georgian patriarch responded.

St. Tikhon of Moscow was elected the first patriarch of Moscow and All Russia since 1721 on November 5/18 and enthroned on November 21/December 4.

The Georgian Church head was last in Russia a year ago for the celebration of Pat. Kirill’s 70th birthday on November 20. The Georgian Church celebrated the centenary of its own restored autocephaly and patriarchate on March 25 this year.