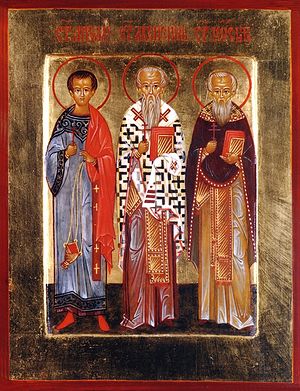 Martyrs Akepsimas the Bishop, Joseph the Presbyter and Aethalas the Deacon of Persia were leaders of the Christian Church in the Persian city of Naesson. His flock devotedly loved their hierarch for his ascetic life and tireless pastoral work.

The emperor Sapor ordered his men to seek out and kill Christian clergy. Saint Akepsimas also was arrested, even though he was already an eighty-year-old man. They took him to the city of Arbela, where he came before the judge Ardarkh, a pagan priest of the sun god. The holy Elder refused to offer sacrifice to the Persian gods. For this he was fiercely beaten and thrown into prison, where on the following day the seventy-year-old priest Joseph and the deacon Aethalas were severely beaten and thrown into jail with him. For three years the saints were held in confinement, and suffered from hunger and thirst.

Emperor Sapor came to the temple of the god of fire, located not far from Arbela, and wanted to take a look at the three holy martyrs. Exhausted and covered with festering wounds, the saints were brought before the emperor. When he asked them to worship the pagan gods they firmly refused, confessing their faith in Christ instead.

The holy bishop was beheaded, but the presbyter and deacon were taken into the city to be stoned.

The execution of the presbyter Joseph was prolonged for several hours. A guard was placed near the place of execution, so that Christians would not take the body of the holy martyr. On the fourth night a strong windstorm raged near the city, lightning killed the guard, the wind tossed stones about, and the body of Saint Joseph disappeared.

Deacon Aethalas was taken to the village of Patrias, where he was stoned. Christians secretly buried his body. A tree grew on the saint’s grave, and its fruit brought healings.

You were pillars of the Church, O servants of godliness, / and you humbled the proud worshippers of fire. / Much afflicted hierarch Akepsimas, Joseph the presbyter and Aethalas the deacon, / pray to Christ our God / to grant us His great mercy.

You celebrated the mysteries blamelessly, O wise one, / and became yourself an acceptable sacrifice, O divinely blessed one! / You gloriously drank of the cup of Christ, Holy Akepsimas. / Together with your fellow sufferers you are praying unceasingly to Christ God for us all.